Here are some favourite passages from this powerful, enigmatic book in prose poetry:


Please forgive me. I pray and can't make it stop. There were lambswool wigs and paperweight eyes, two factory fires. Instead of blankness, I learned to draw stars with two triangles, one upside and overlapping the other. I covered pages, then like bracelets, my wrists.

What should I do with my mind? Think of the way it broke until the breaking is language.

Unlike the other automatons who lift a hand mirror or balloon, she exists even when we close our eyes, slapping one small brass cymbal into another, frantically, to prove touching.

When I have a headache, I lift my hand over my eyes--if death is a failure of imagination, we are alive.

The mutual helplessness of seeing and being seen.

As with every revelation, midair, oblivion is realigned and clarified: I want to die then decide.

What makes the object alive is desire without relief.

Within the bonnet, the two-faced head is rotated by pulling a string from the torso: one face calm, one crying plastic beads on her cheeks--turning: peaceful, sad, peaceful.

Nothing in-between, no transition--I don't remember why she is suffering, why she is glad. It happens so fast: I am hopeless as I pull the string in her torso, then sick with wonder.

After a while, we moan and lift our arms in order to feel what she feels: her pose is agony.


In the UK, Small Porcelain Head is available from Wordery.

Here is my last selection of favourite passages from this outstanding book:


...fifty red parrots dove and roared
like a conscious waterfall.

The Pacific at night is red
and gives off a soot of desire.

Enormous pools of a moment kept opening around his hands
each time he tried to move them.

from "XL. Photographs: Origin of Time"

...a light so brilliant it feels cold and hot at once.

In the photograph the face of
Herakles is white. It is the face
of an old man. It is a photograph of the future, thought Geryon months later when he
was standing in his darkroom
looking down at the acid bath and watching likeness come groping out of the bones.

This is a memory of our
beauty.

We are amazing beings,
Geryon is thinking. We are neighbors of fire.
And now time is rushing towards them
where they stand side by side with arms touching, immortality on their faces,
night at their back.

from "XLVII. The Flashes in Which a Man
Possesses Himself"

In the UK, you can buy Autobiography of Red from Hive here.

The Great Graduating Poets' Showcase at Bath Brew House, May 2016

In what I hope will become an annual event, we held our second Great Graduating Poets' Showcase at The Bath Brew House last Friday night, and it was standing-room only! Here's a first round of photos from that excellent night. 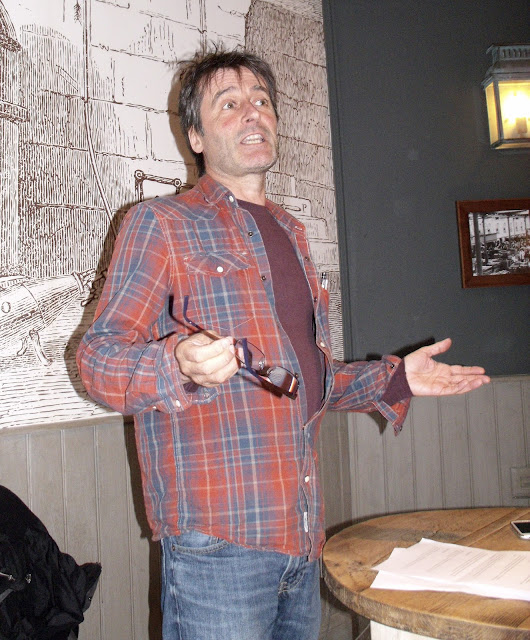 Our compere was the tutor for the third-year poetry module this year, Neil Rollinson. 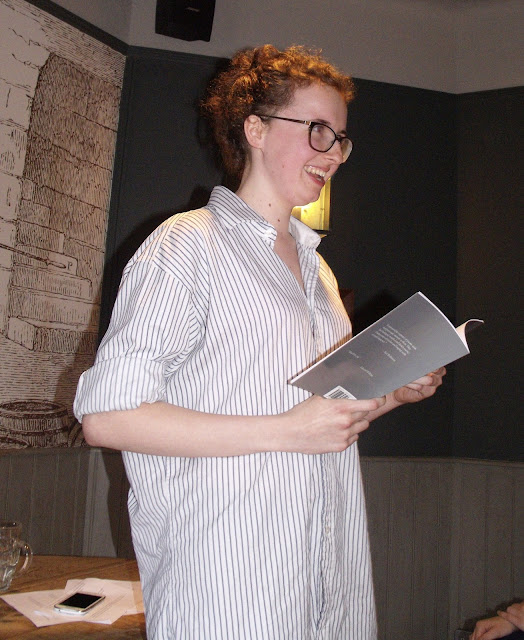 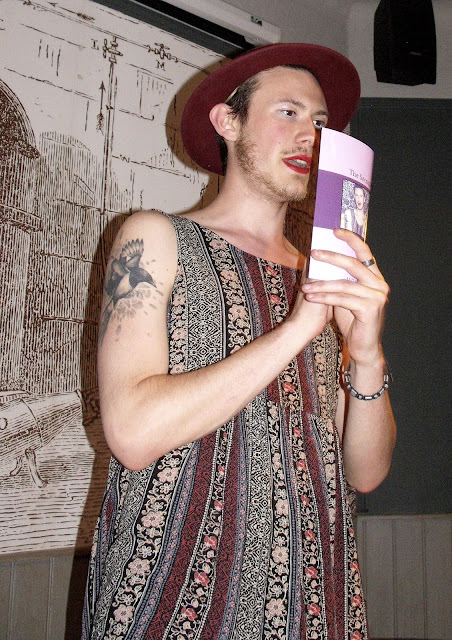 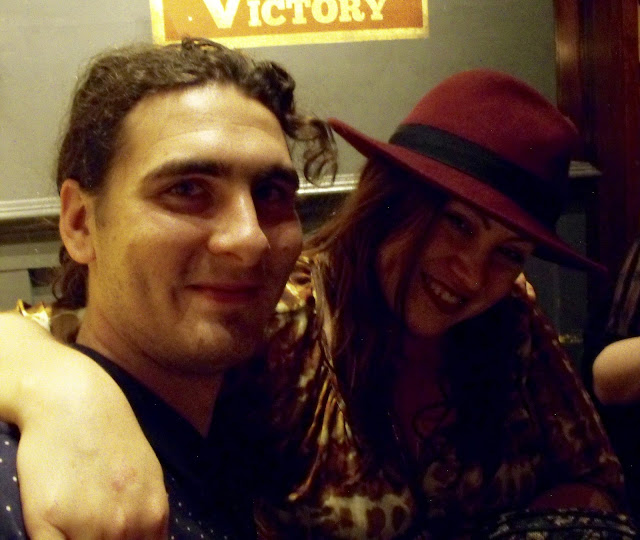 The whole gang! Well done, everyone!

Some more favourite passages from this amazing book:


The pimiento stung his mouth alive like sudden sunset.

You eat like my daughter. With a certain
shall I say lucidity.

Black outside air tossed itself
hard against the windows.

Oh don't go, thought Geryon who felt himself starting
to slide off the surface of the room
like an olive off a plate. When the plate attained an angle of thirty degrees
he would vanish into his own blankness.

And for a moment the frailest leaves of life contained him in a widening happiness.

Cars nested along the curb on their shadows. Buildings leaned back out of the street.
Little rackety wind went by.
Moon gone. Sky shut. Night had delved deep.

He could see the harbor blackly glittering. Cobblestones grew slick. Smell of salt fish
and latrines furred the air.

Hardly glancing
at one another the three of them played
as one person, in a state of pure discovery. They tore clear and clicked and locked
and unlocked, they shot
their eyebrows up and down. They leaned together and wove apart, they rose
and cut away and stalked
one another and flew up in a cloud and sank back down on waves.

The petals of their colognes rose around them in a light terror.

...the elevator crashed like a mastodon within its hollow cage.

Ancash sat very straight,
a man as beautiful as a live feather.

Soon they were out on the street
walking fast along Avenida Bolívar with a hard wind strumming their bodies.

A winter sun had thrown its bleak wares on the sky
and people going past
looked dazzled.

In the UK, you can buy Autobiography of Red from Hive, supporting local independent shops, here.


Up on the overpass
the night was wide open
and blowing headlights like a sea. He stood against the wind and let it peel him
clean.

...Geryon
caught her other arm, it was like a handful of autumn.

Each morning a shock
to return to the cut soul.

Outside the natural world was enjoying
a moment of total strength. Wind rushed over the ground like a sea and battered up
into the corners of the buildings,
garbage cans went dashing down the alley after their souls.

Geryon's life entered a numb time, caught between the tongue and the taste.

...Geryon's
whole body formed one arch of a cry--upcast to that custom, the human custom
of wrong love.

As the aeroplane moved over the frozen white flatland of the clouds Geryon left
his life behind like a weak season.

Geryon closed his eyes and listened to engines vibrating deep in the moon-splashed
canals of his brain.

Outside a bitten moon rode fast over a tableland of snow.

A cold spray
of fear shot across his lungs.

Four of the roses were on fire.
They stood up straight and pure on the stalk, gripping the dark like prophets
and howling colossal intimacies
from the back of their fused throats.

He moved off into the tragicomedy of the crowd.

Pulling his body after him
like a soggy mattress Geryon trudged on uphill.

Sunset begins early in winter, a bluntness at the edge of the light.

Geryon paused in his listening and saw the slopes of time spin backwards and stop.

It was the hour when the snow goes blue
and streetlights come on and a hare may
pause on the tree line as still as a word in a book.

His eye traveled to the clock at the front of the room and he fell into the pool
of his favorite question.

In the UK, you can buy Autobiography of Red from Hive, supporting local independent shops, here.

One of the best parts of visiting San Francisco is visiting Fisherman's Wharf. Yes, it's too touristy, but 1) the sea lions and 2) clam chowder in Boudin sourdough bread bowls. 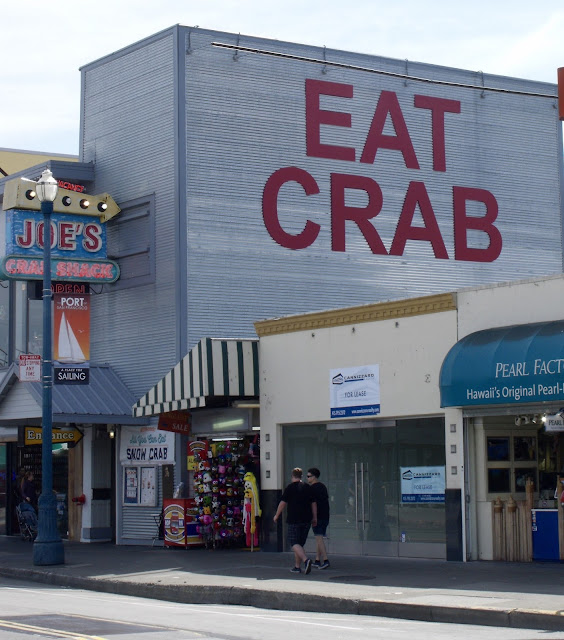 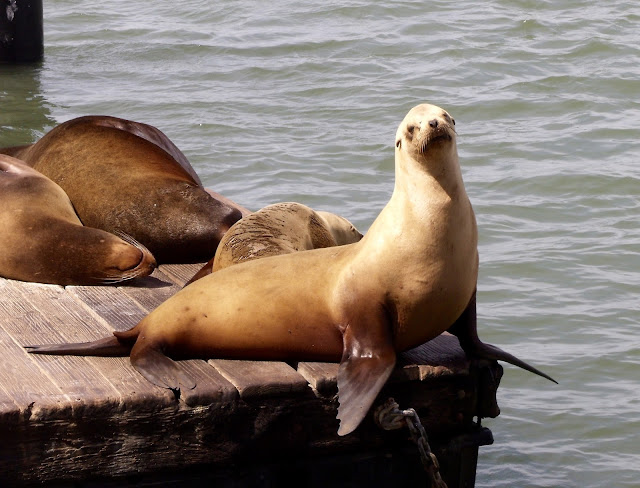 Autobiography of Red: A Novel in Verse by Anne Carson (Vintage, 1999), first selection

A first selection of favourite passages from this wonderful book:

He clothed himself in this strong word each.

Before this time Geryon had not lived nights just days and their red intervals.

Facts are bigger in the dark.

...said his mother
rhinestoning past on her way to the door. She had all her breasts on this evening.

She was standing before him now
smiling hard and rummaging in his face with her eyes.

They grinned at each other as night climbed ashore.

Then he met Herakles and all the kingdoms of his life shifted down a few notches.
They were two superior eels
at the bottom of the tank and they recognized each other like italics.

The world poured back and forth between their eyes once or twice.

Her voice drew a circle
around all the years he had spent in this room.

A pure bold longing to be gone filled him.

from "IX. Space and Time"

He understood
that people need
acts of attention from one another, does it really matter which acts?

He could feel the house of sleepers
around him like loaves on shelves.

...and a fragment of human voice tore itself out and came past, it seemed
already long ago, trailing
a bad dust of its dream which touched his skin.

As in childhood we live sweeping close to the sky and now, what dawn is this.

In the UK, you can buy Autobiography of Red from Hive here.
Posted by Carrie Etter at 8:30 am No comments: 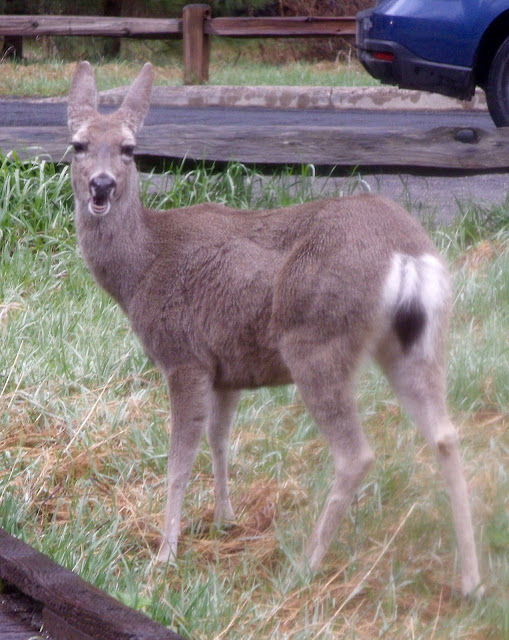 It was surprising how close to the road and to people the deer came. 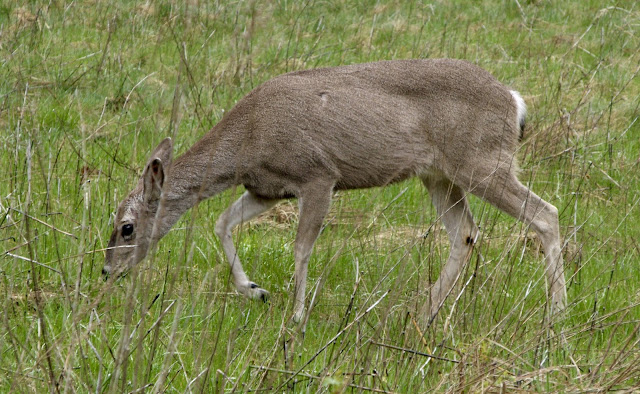 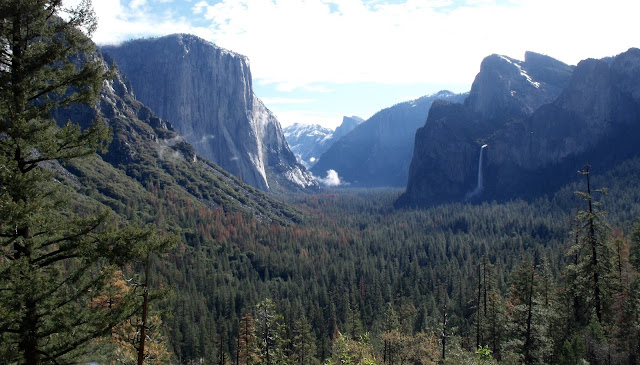 After three very misty and rainy days, on the day we left it cleared considerably, and we saw the famous valley view. Glorious. 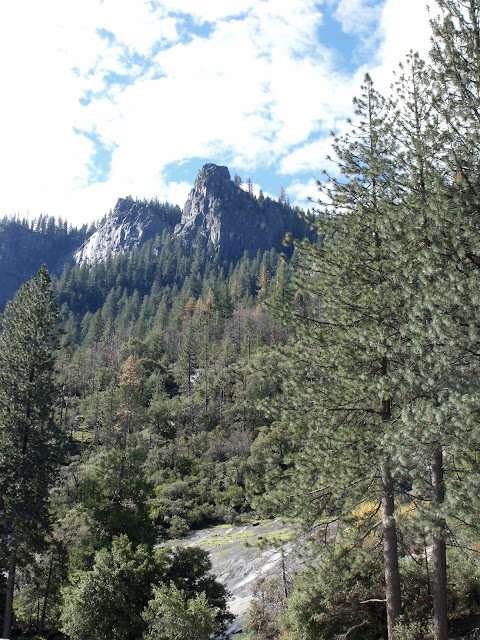 Trev and I are both hoping to return another time for a longer stay.