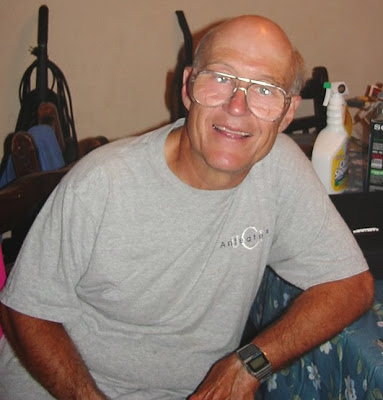 You are dearly missed.
Posted by Carrie Etter at 11:29 am No comments: 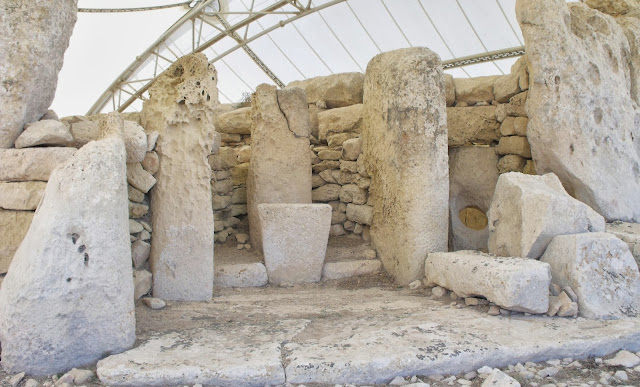 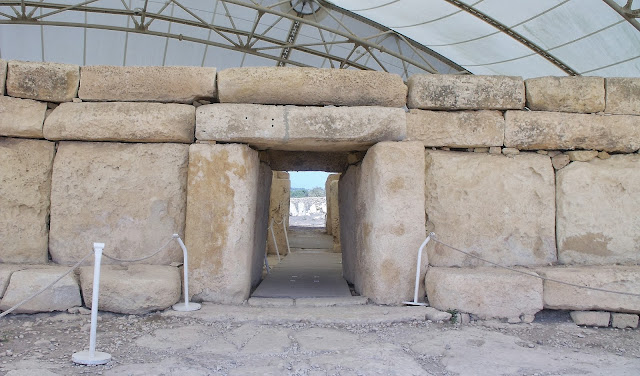 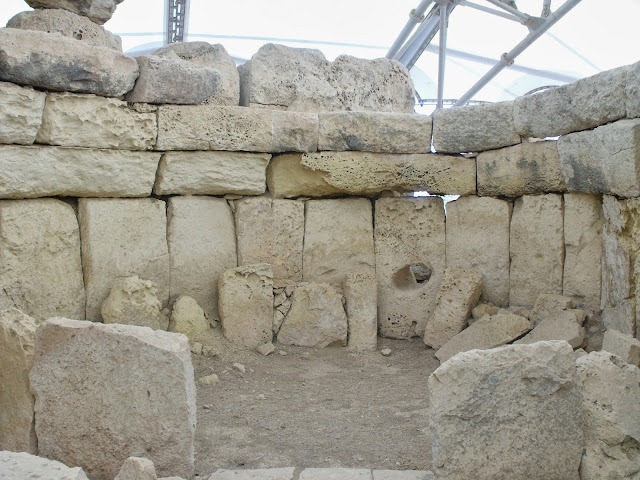 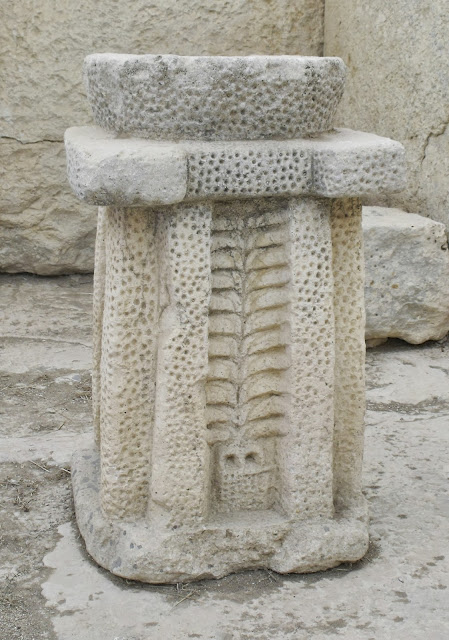 You can learn more about Malta's megalithic temples on the UNESCO site.
Posted by Carrie Etter at 10:30 am No comments:

Things Not to Do When Reading Your Poetry to an Audience

Thanks to Facebook friends and acquaintances for their many useful suggestions! I hope anyone who reads their work publicly will take note.

1. Don't go over time. Don't ask if you're over time or coming up against the time limit. You should know how long you have and have planned your poems accordingly.
2. Don't get drunk before reading. Reading drunk is highly unattractive, however you may feel at the time.
3. Don't mumble or whisper. Enunciate your words clearly with good volume. Read at a conversational pace, neither wildly fast nor snail-slow.
4. Don't apologize or make self-deprecating remarks about the poems.
5. Don't avoid the mic. If it's there, use it, whatever you think of your powers of projection.
6. Don't read a poem you just wrote that day, however good you think it is.
7. Don't read from a laptop or phone. A laptop is too awkward to hold and maintain eye contact, while a phone is generally too small to read from.
8. Don't arrive late. If you're a scheduled reader, you should arrive at least fifteen minutes before the reading is due to begin.
9. Don't ask the organizer if there's time for a couple more poems. If you don't know if there's time, you're not showing the audience due consideration.
10. Don't rock on your feet or pace.
11. Don't play with things in your pockets (keys, change, etc.).
12. Don't give your poems lengthy introductions. Keep your remarks succinct.
13. Don't neglect the other readers by talking or checking your phone, etc. Give them the attention you hope to receive yourself.
14. Don't read in a single tone throughout your poems. Record yourself and listen. Change what you don't like or what you think may be ineffective. If you can make a video recording of yourself reading, so you can look for mannerisms, etc., even better.
15. Don't keep your face in your book/pages. Make regular eye contact.
16. Don't immediately flip through pages to the next poem as soon as you have finished one. Allow enough of a pause at the end of a poem that the audience is clear that it's finished.
17. Don't say where poems have been or are going to be published. It makes you seem insecure and/or arrogant.
18. Along the same lines, don't tell the audience who likes this poem--a famous author, your workshop group, your mother, etc. It won't dispose the audience to like your poem too.


I suppose 9 and 16 annoy me the most: the former seems self-indulgent, while the latter creates confusion and makes it hard to enjoy the reading.

Pale dawn was filling up the lap of the room.

into your privatest presentiment
and stayed, face down in your black overcoat.
To my wonder.
Endlessness runs in you like leaves on the tree of night.
To live here one must forget much.

the end of "TV Men: The Sleeper"


XXIV.
A stranger is poor, voracious and turbulent.
He comes

from nowhere in particular

and pushes prices up.
His method of knowing
is to eat it.

Who in a nightmare
can help himself?

XXXIII.
Rome collapsed when Alaric ran out the dawn side.

from "The Fall of Rome: A Traveller's Guide"

Lapping at Isaiah's ears black birdsong no it was anger.

The nation stirred in its husk and slept again.

It was a cold winter evening, the cold bit like a wire.

He slept, the asters in the garden unloaded their red thunder into the dark.

from "The Book of Isaiah"

Posted by Carrie Etter at 9:30 pm No comments:

My review of Heather Phillipson's Instant-flex 718 in today's Guardian

It's a lively, intelligent debut I was happy to discuss and recommend. You can read the review here.
Posted by Carrie Etter at 7:12 pm No comments:


It was the hottest of days when we visited the prehistoric temples at Qrendi, Malta. First we saw Mnajdra.

The covering is protective, but rather ruins the atmosphere.... 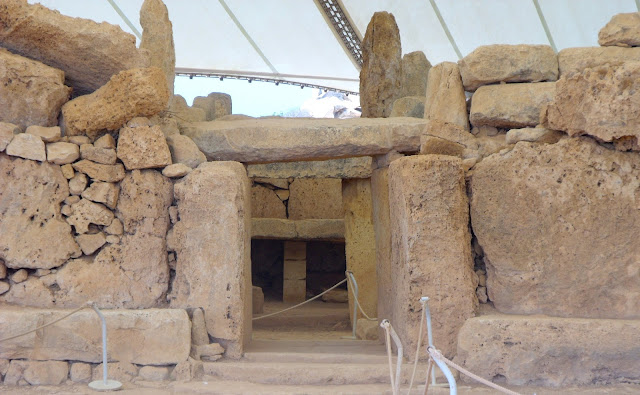 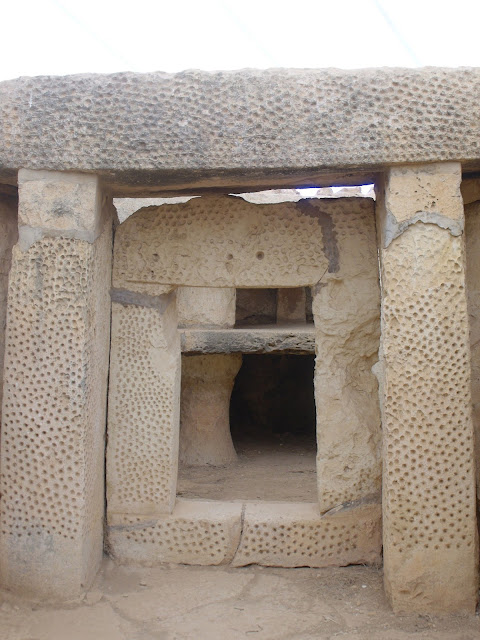 These pressed dots are one of the first types of decoration seen in the prehistoric temples. 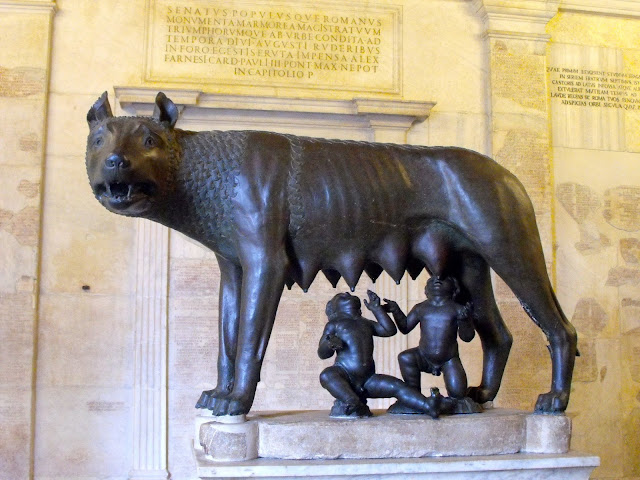 I can't recall how many times this image appeared in an undergraduate Latin text,
but I saw it often enough to be delighted to see the original! 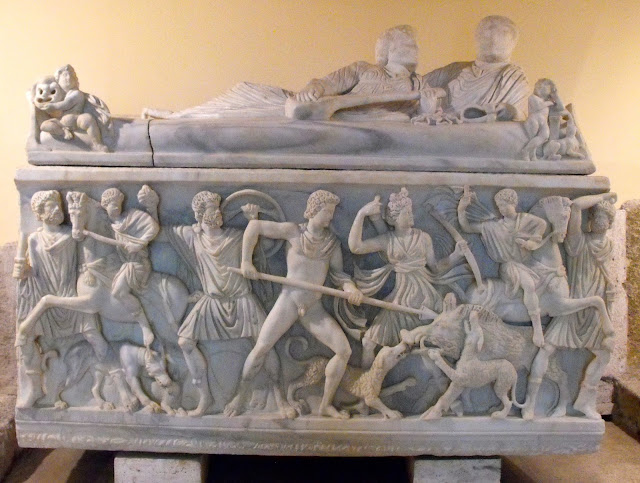 An elegant sarcophagus, with a strange, theatrical mask
in the upper left corner that I'd see again in Italy.... 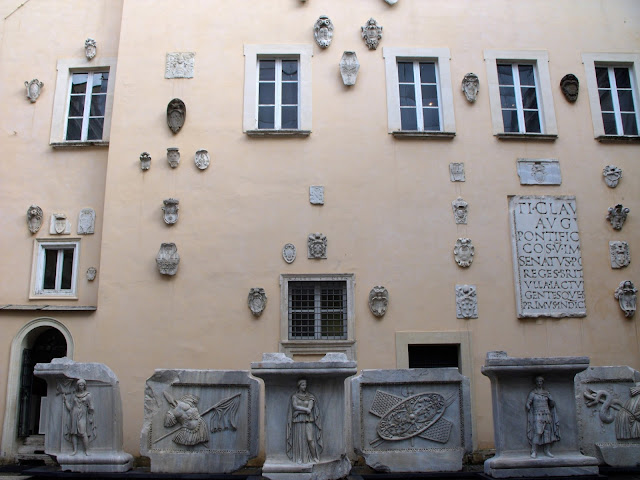 I guess these were leftovers of a sort, in a courtyard. What leftovers! 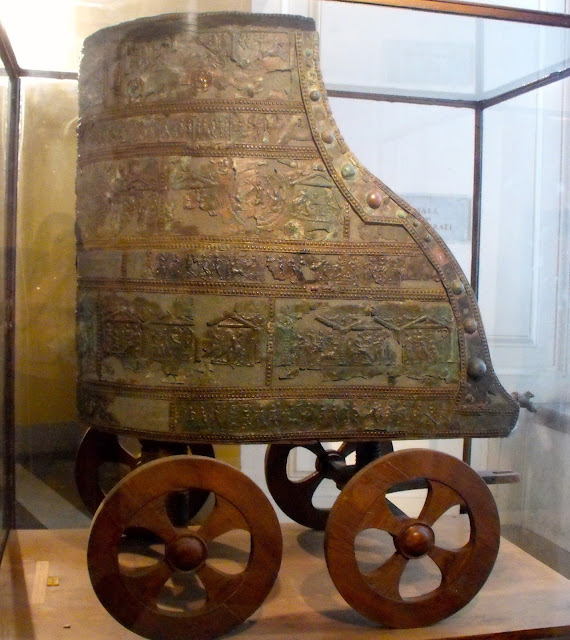 A chariot! A real, bleeding chariot! If only it'd had a date on the placard! 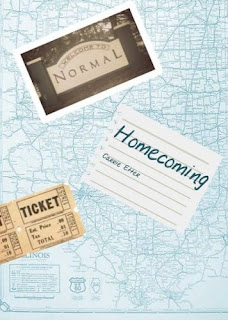 It's here! My latest pamphlet/chapbook is Homecoming, from the fabulous Dancing Girl Press in Chicago. Here's what I've come up with as an account of the work: 'Homecoming picks up on a sense of isolation in the American Midwest as well as its emphasis on the more positive attributes of family life. Thus when the father falls prey to injury and illness, his decline upsets the meanings of family, selfhood and home. Poems in Homecoming first appeared in Court Green, New Welsh Review, Notre Dame Review, Poetry Ireland Review, Poetry Wales, The Rialto, Sentence: A Journal of Prose Poetics, The Times Literary Supplement and The Warwick Review.'

In the US, please order directly from the press for $7 plus shipping; in the UK, you can obtain it directly from me post-free for £5.

As some may have noticed, I like to use a pamphlet as a smaller concentration of an ongoing book manuscript (poems from several pamphlets went into Divining for Starters, while The Son selected from Imagined Sons). Homecoming derives from a manuscript with the working title, The Weather in Normal. It may become book four; it's hard to say at this point.

You remember too much,
my mother said to me recently.

Why hold onto all that? And I said,
Where can I put it down?

Each morning a vision came to me.
Gradually I understood that these were naked glimpses of my soul.

I called them Nudes.

By now I was so cold
it felt like burning.

But by now the day is wide open and a strange young April light
is filling the moor with gold milk.
I have reached the middle

where the ground goes down into a depression and fills with swampy water.
It is frozen.
A solid black pane of moor life caught in its own night attitudes.

It is a two-way traffic,

the language of the unsaid.

The April light is clear as an alarm.

As we pass them it gives a sudden sense of every object
existing in space on its own shadow.
I wish I could carry this clarity with me

into the hospital where distinctions tend to flatten and coalesce.

His face cracks open it could be a grin or rage

and looking past me he issues a stream of vehemence at the air.

Sunlight flocks through the room.

He used to be a big man, over six feet tall and strong,

but since he came to hospital his body has shrunk to the merest bone house--
except the hands. The hands keep growing.

I stared at the back of her head waiting for what she would say.
Her answer would clear this up.

But she just laughed a strange laugh with ropes all over it.

Those nights lying alone
are not discontinuous with this cold hectic dawn.
This is who I am.

The Teatro dei Pupi, with its laboratory, museum, &c., is an institution in Ortigia, Sicily, producing puppet plays using centuries-old stories. These scenes come from the play I saw last night, La Triste Istoria di Olimpia. The blurriness of the final photo indicates the speed of the battle scene! 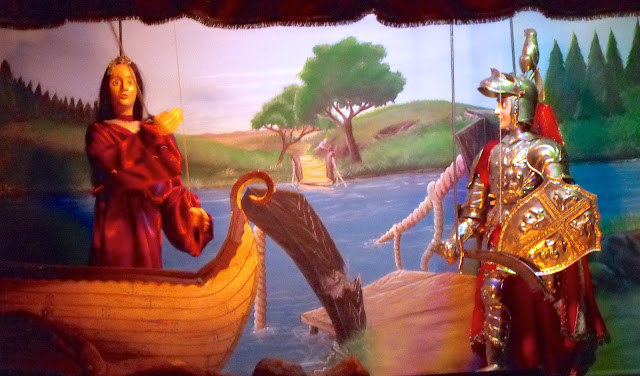 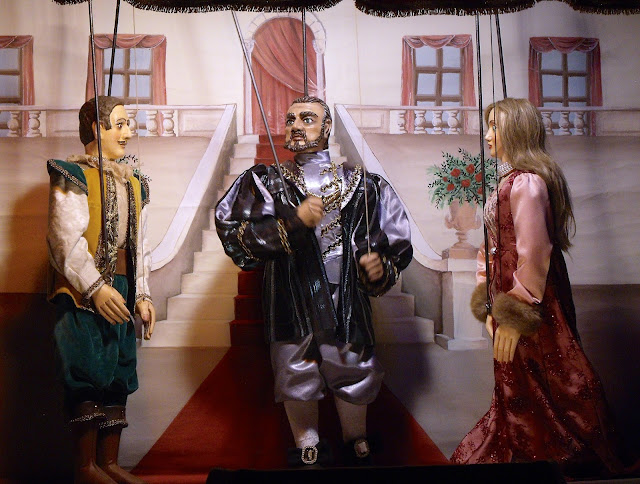 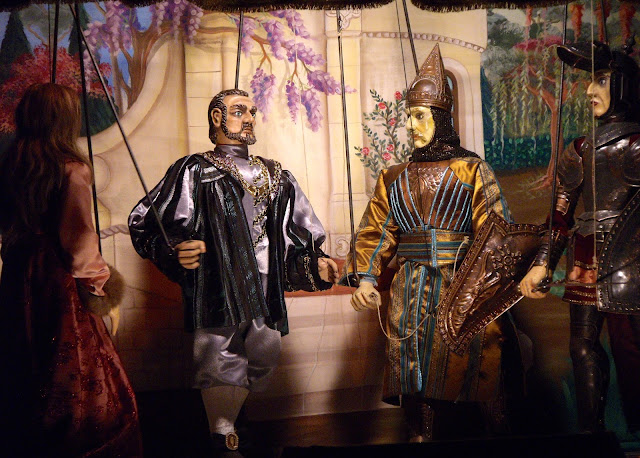 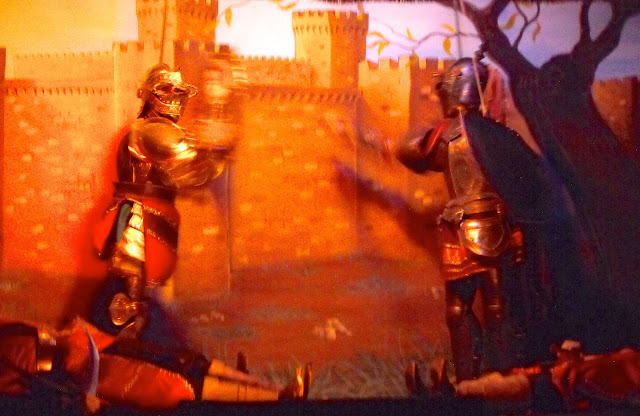 Posted by Carrie Etter at 12:38 pm No comments:

Images of some of the extensive remains of The Forum in Rome.... 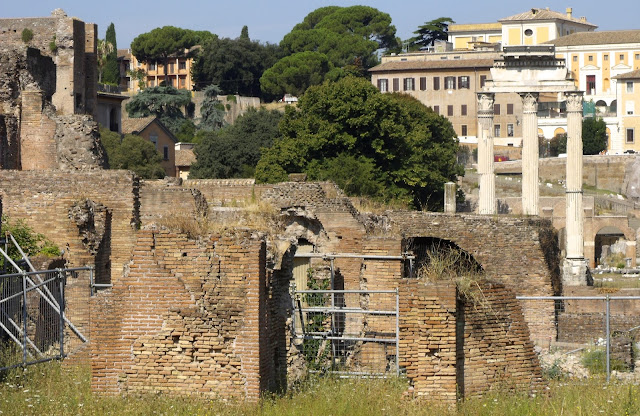 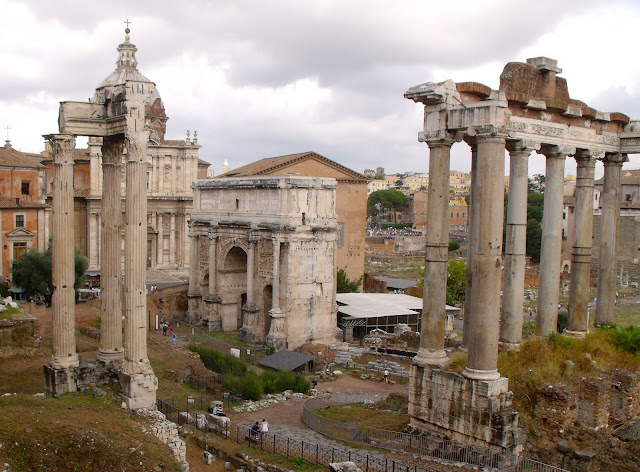 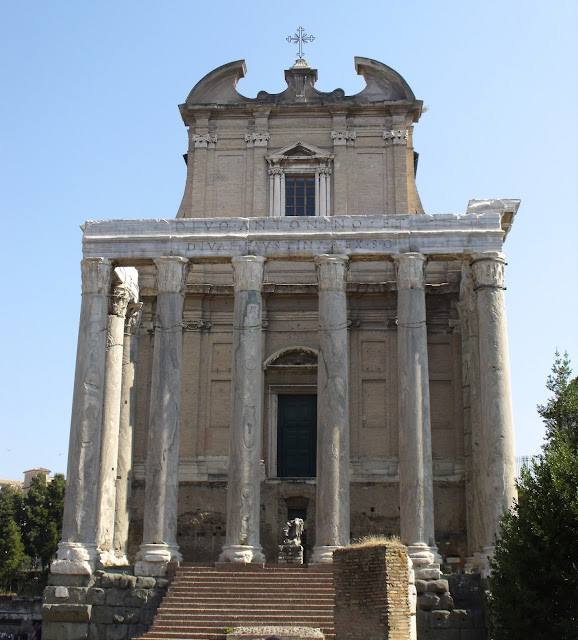 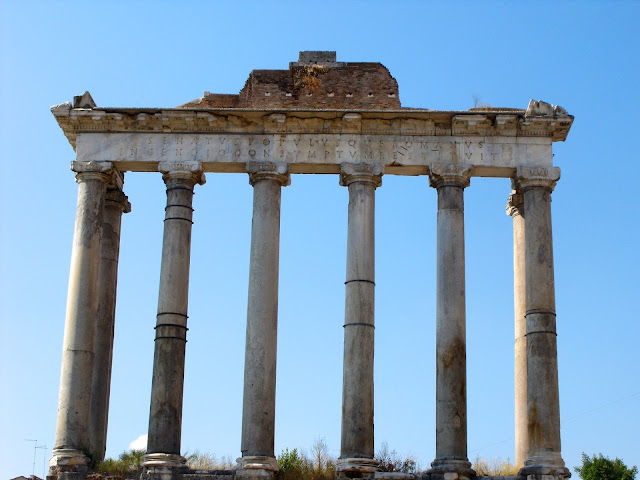