The Other Room reading

Here's my (dimly lit) reading at The Other Room in April 2011. I read a couple poems by other poets in Infinite Difference: Other Poetries by UK Women Poets before reading from my collection, Divining for Starters. Thanks again to James Davies, Tom Jenks and Scott Thurston for inviting me.
Posted by Carrie Etter at 2:23 pm No comments:

The Other Room Interview

with me is well-edited; I've only delayed posting it because it shows me with two chins (and so I am dieting again). Here it is, for the interested, brief and pertinent.
Posted by Carrie Etter at 7:20 pm 2 comments:

Email ThisBlogThis!Share to TwitterShare to FacebookShare to Pinterest
Labels: interview, The Other Room 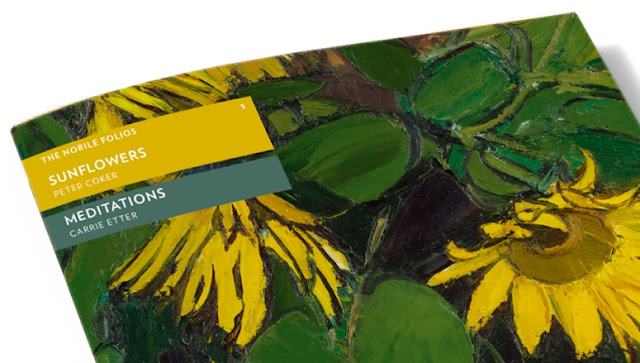 Sylph Editions' Nobile Folio of Peter Coker's painting, "Sunflowers," is out, with my series of prose poems, "Meditations." The series intermingles responses to Coker's painting with thoughts on my late mother and flowers; the piece as a whole is dedicated to her memory. You can learn more about the folio on Sylph Editions' website here.

Posted by Carrie Etter at 5:52 pm No comments:

Father's Day without my father 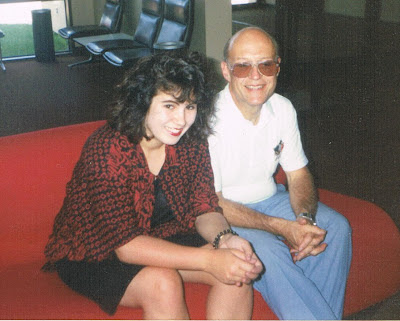 Dad and I at the former Bloomington-Normal airport, when it had only two gates and you walked across the tarmac to your plane. I don't know the date of this photo, but I'm sure I was in my twenties. I miss him so much.
Posted by Carrie Etter at 2:22 pm 2 comments:

Here is my second selection from Alasdair's pamphlet. For a reminder of the context, please read the second paragraph here.


You were there,
I was over here,
the swifts were
everywhere between
being transcendental and
complicated and always
trapped in their velocities.


Their stitchwork fell apart
like old infatuation,
like the ghost of fireworks,
until dusk thickened
and they were only
shivers in it.


I moved closer.
You let me help with
your imaginary shawl.


You can buy a copy of Brumaire and Later directly from the publisher for a mere £5.50 including postage.
Posted by Carrie Etter at 9:00 am No comments:

I'm just back from Beeston, near Nottingham, where I read at The Flying Goose Cafe last night with C.J. Allen and Joe Coghlan. It was a lovely evening, thanks to organizers Sarah Jackson and Éireann Lorsung's care. The night before, I read with Alasdair Paterson and Robbie Vane at The Garden Cafe in Frome; thanks to organizer Crysse Morrison for her kindness and support.

Today I learn both have been reviewed online: Morrison on her blog entry for 15 June; and Alan Baker on his blog. Thanks to both for their appreciative comments! Two splendid nights running!
Posted by Carrie Etter at 2:23 pm No comments: 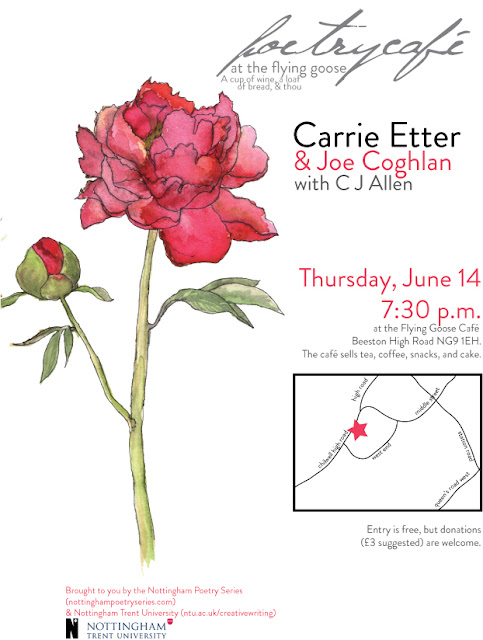 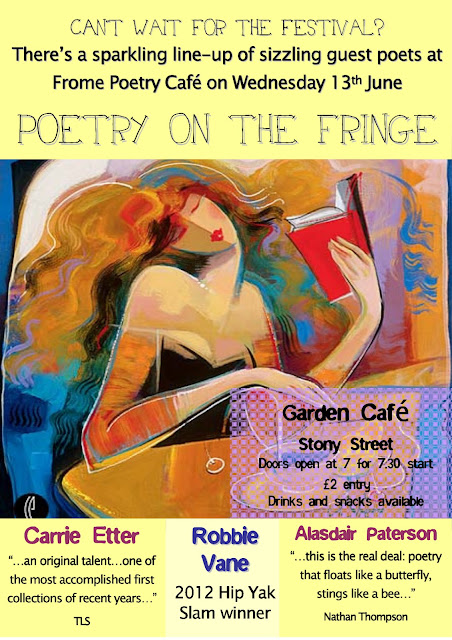 It's been out for a while, but only last week did I obtain Alasdair Paterson's pamphlet, Brumaire and Later. The poems are wonderfully precise and taut. Alasdair has given me permission to post here two poems from the pamphlet, one from each section; it helps to be familiar with the context, available on the publisher's website here (so go read the second paragraph on that page and come back).

Today we'll be looking through
what's called the revolutionary window.
Each time it opens and shuts
the view is bound to change.

Change is brought to you today
in the name of these laden country folk
who've groped their way to market.
We'll explain it to them later.

Meantime we recommend the celery,
free from the earth, its prison;
so elegant, so palely bred by now
you'd think it wouldn't snap.

It snaps; and pricks your eyes
with an extract of summers
strong-armed from you, the lives
your children should have had.

And with the antidote it carries:
a fizzy virtue of fresh beginnings.
Beginnings waiting for us all,
both sides of the revolutionary window.

You can buy a copy of Brumaire and Later directly from the publisher for a mere £5.50 including postage.
Posted by Carrie Etter at 5:34 pm No comments:

My review of Ian Pindar's Constellations appears today at The Guardian, minus two sentences of criticism. Here is the sentence prior to them along with the missing sentences:

The poems are most effective when precise images build into nuanced observations, as when the speaker notes "the seductive endurance of the particular" toward the end of "21." When the entire poem  operates as an abstract meditation, sometimes the result appears a little hackneyed, as when "62" begins "Poetry must go where prose cannot follow." At other times the desire to declare means an otherwise intriguing poem is undermined by a trite conclusion, as when "75" closes with "A new beginning, a fresh start, morning" and "77" ends "If my children are happy I am happy."

From there the review resumes as it's printed. I post this here because I don't want any reputation I may have as a discerning reader of poetry to be marred by what seems a wholly positive review of a not wholly strong collection. Obviously it has a number of good qualities, as the review in The Guardian notes, but the weaknesses need to be noted also.