This blitzed, hungry, smoke-thin world
invented me, and its ardent lies

...dryad men, full
of mutton and commerce, stomp through in gray overcoats.

The new designer had never seen an eagle and did not know
it carried prey in its talons, or he wasn't as deft as the
old artist, or he was bored and manufacturing trouble.
Ergo, the duck with something nasty in its bill.

...the irritable phoenix plotting immolation in its ball of myrrh....

from "Concerning the Liver Bird"

There he goes, peeping at my bosom
and away again quick, stumbling
and clutching his guilty heart.

It's snowing flakes of coal today.

Even my great-grandmother's suffering
was never told, save for the last birth, seventeen
years after the rest. Go to the pictures,
Father said, and the elder children grabbed
the coins and ran. They didn't know and he
was ashamed. The newborn small and powerful,
distilled from the ether, dreams, old rain.

All beginnings hurt
someone: the animal, the ground. So much
to witness and all of it slipping away.

A day becomes a story becomes a bird,
a lost seagull who shrinks each time
I describe him.

I'd belong
to it whether it wanted me or not.

end of "Vronhill Street in Liverpool 8"

It's an incoherent sound,
the shout of the unshaven man in the dirty cap,
but he has what you need and he sells it cheap.

If a magpie lights on the garden wall, she might

look up, and the wind might pluck a fragrance
from a blossoming bough.

from "The Forgetting Curve"

You can purchase Heterotopia directly from the publisher here.


We had a small, attentive audience for our reading last night at Gulliver's in Manchester. The readers were Carola Luther, Brian Bartlett, Stephen Burt and I. So many good poems and such great company! Here are some photos of the evening--unfortunately I missed snapping a picture of Peter Riley as he had to hurry off for a train. 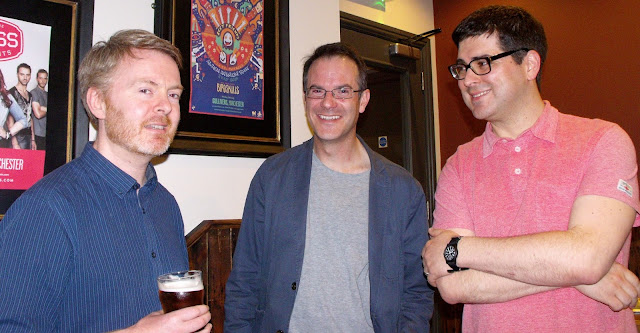 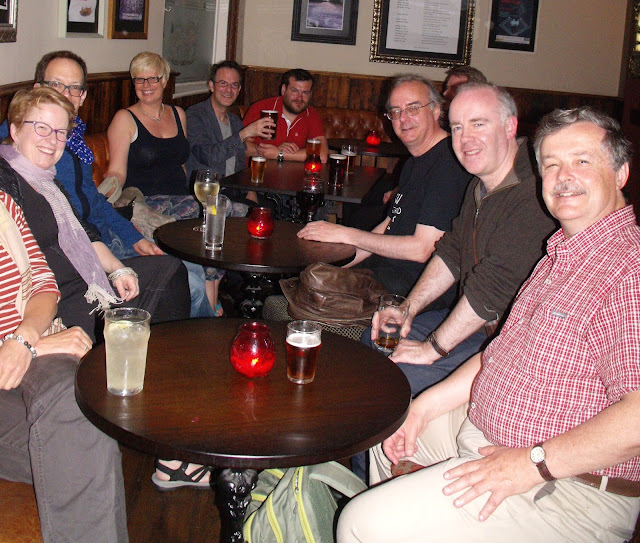 Nearly the whole gang! (I didn't mean to cut off Carola Luther!) 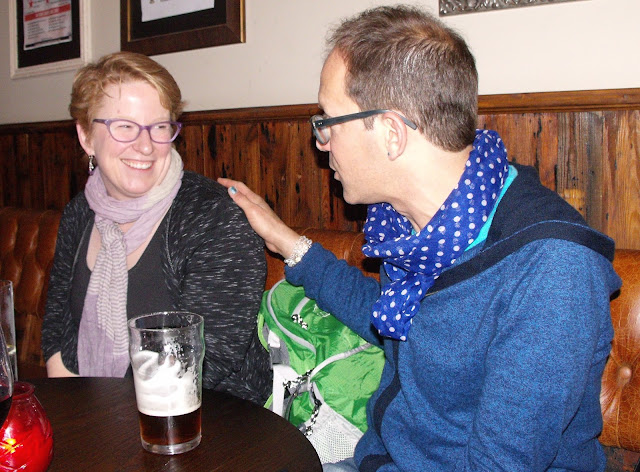 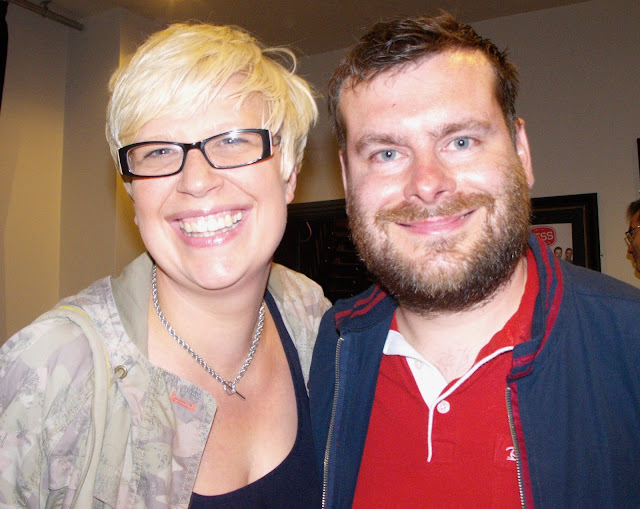 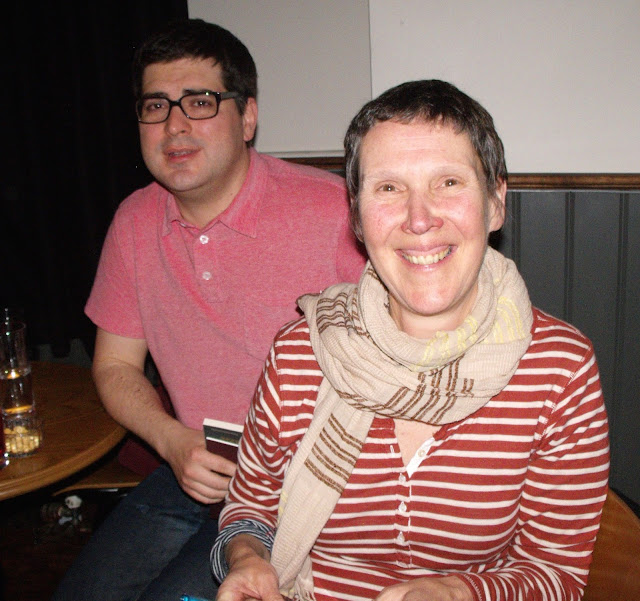 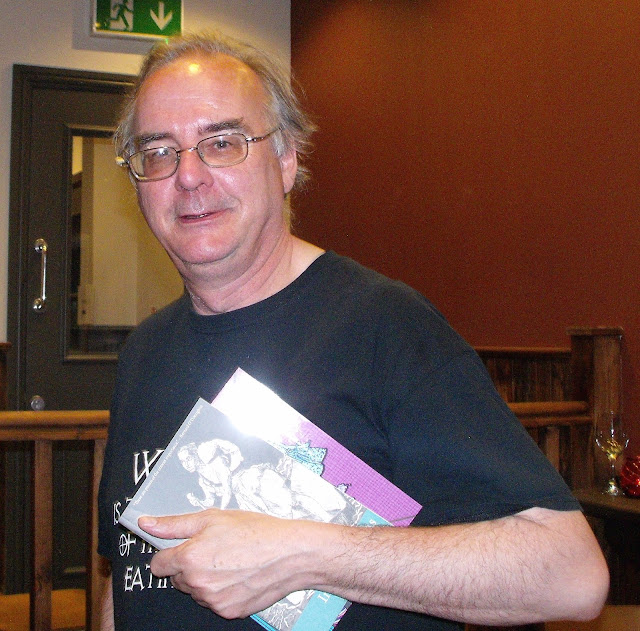 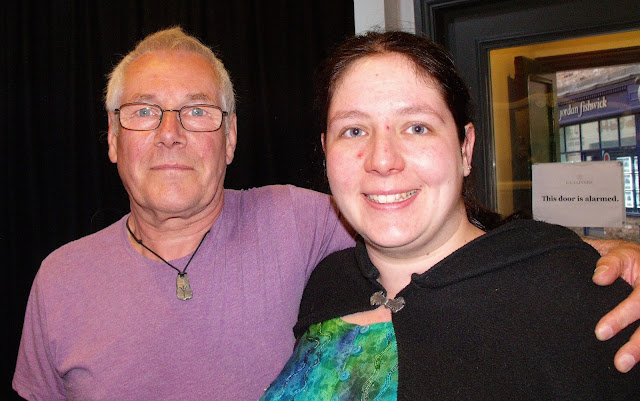 Posted by Carrie Etter at 8:12 pm No comments:

Daniel Sluman's Absence has a weight of its own (Nine Arches, 2012)

to find a tube hanging from your chest
your ears will swarm with bees,

the doctor will catch you

just before you hit the tiles.

The tumour on the x-ray

tells you life is a fistful of cobwebs.

I have adored your ankles,
snaffled the fine hairs that crisp
the small of your back,
& now, after I've licked

the soap-traces from the underside
of your knees, we find ourselves
stalled in the marriage bed;
your maiden name

a peppercorn crushed
in my mouth.

from "After the Wedding"

I think
of you, sealing yourself in a lead coffin where

the faces of the men you shot burst like poppy seeds.

end of "Your Limp Breath Slides off the Hospital Walls"

& the shadows we nailed
to
the floor
start to stir.

You stare until the letters tremble
like needles on a pine tree.

I have pulled apart
the machinery of that night

from "Scenes from a Film"

We'll return where we left, forgetting

when we started; each breath
binding us tighter to the past.

end of "When Our Pupils Swallowed the Irises Black"

this world in inky loops,

tourniquet this moment
before it bleeds out.

end of "When Lightning Switchblades"

When the doctor brought in my scan
my liver had bloomed a Rorschach test,

& we all stared, seeing only one thing.

The last time we spoke

I was smearing the red flag
of myself around the tub....

as a tiny pink coffin, wandering

from place to place, waiting
to fall into the open earth.

beginning and ending of "Dear Samaritans,
I'm Writing This to Let  You Know Everything's Okay Now"

Violins eased from speakers
& hovered around our gestures

as a whole summer bled into that night,
a shoddy polaroid.

You can buy Absence directly from the publisher here.

Posted by Carrie Etter at 9:37 am No comments:

Email ThisBlogThis!Share to TwitterShare to FacebookShare to Pinterest
Labels: Absence has a weight of its own, Daniel Sluman, Nine Arches Press

Here are some favourite passages:

regardless of
where you are bats return in the early evening, & we are on the threshold of the [in]
visible world....

a solitary blackbird sings
& we are
undone
then

Darkness brayed within him

You can buy Zyxt directly from the publisher here.
Posted by Carrie Etter at 9:00 am No comments:

The Forward Prizes, with thoughts for those on and not on the shortlists


Today The Guardian covered the announcement of the Forward Prize shortlistings. I've been quoted by newspapers four times before--twice by the L.A. Times, twice by the (central Illinois) Pantagraph, yet never accurately until now. You can read the article here.

While I've been pleased to see congratulations go to the shortlisted poets on Facebook and Twitter, I've also thought of the sadness and disappointment some of those not shortlisted may feel, as I've felt before at similar announcements, and want to say there was much good work that didn't make the shortlists, and not making the list does not mean one's book or poem isn't good.

Email ThisBlogThis!Share to TwitterShare to FacebookShare to Pinterest
Labels: Forward Arts Foundation, The Forward Prize, The Guardian, The Pantagraph

The Third-Year Poets of 2015, second selection

Round two from the student reading at Bath Brew House on 28 May, with the blurbs I wrote for each of their pamphlets. 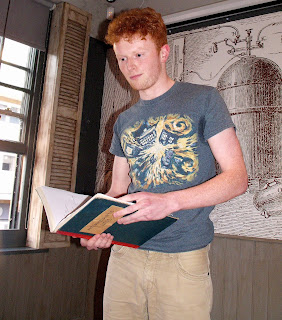 "Sean Martin’s pamphlet Shrike gives animals from sea, land and sky their own distinctive voices in a series of provocative and compelling monologues." 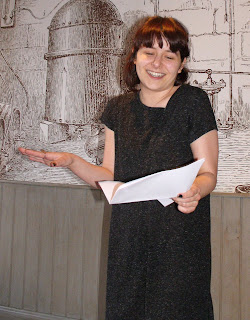 "In the ambitious pamphlet When I Was, Chloe Mayo intelligently and insightfully explores an ambivalence at the heart of selfhood that manifests both in our sense of ourselves as well as in our relationships with others." 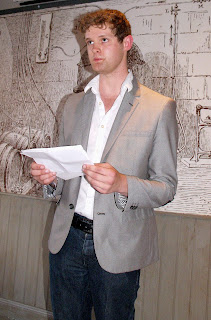 "In Atlas’s richly nuanced poems, Tom Williams conveys the significance of place—indeed, of inhabiting each place anew—throughout our lives." 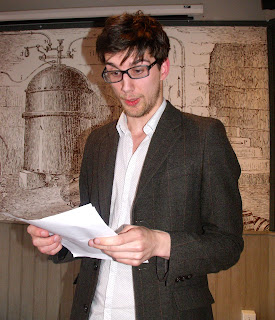 "In his well-nuanced pamphlet, Is This It?, Matthew Leigh explores the psychological complexities of romantic relationships with intelligence and tenderness." 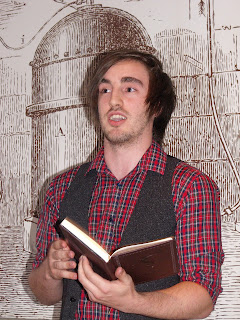 "In this emotive and engaging pamphlet, Skeletons in the Closet, Jack Tinmouth powerfully traces the discovery of sexuality from the purely physical, to the increasing emotional freight of relationships, to romantic love."

An ideal night and hopefully a new tradition for the third-year poets at Bath Spa University!

This ambitious pamphlet is excellent. Here are some favourite passages:


It is biting down it is a red cut when is it a green. It is a red green.

from "the way we bruise"
(a poem, in part, about lettuce)

Go about it gently--brightly--a light-footed trick. Don't pay it too much attention, don't always feel what is felt.

Let the green come down. Let it fall.

Bake the pie for 25 miracles and reduce the temple to 350 delusions and bake until the top is golden brown, another 30 miracles.

the opening sentence of "Strawberry Malfunction"

The oven grows in the dark. Out of one feast comes many....

Nobody pays for gold and silver to be conservative.

I sicken at the floss of it, the twist and count, knotted in cerise, gimped in rose.
*

...an innocent excision of threads from the ordinary....
from "White Work"

These are common duties.
Cheerily brutal.
You have to do it
and do it.

against my cheek
and a little green bridge
I cannot cross

A box: a casing, a continuation, a context.

There will be neither lack not superfluity of paper at any edge or angle. Rent is a heavy item.

Me. That little whore
with a pebble in her breast
a box of sharp tools
and no hope of heaven.

You can purchase the pamphlet from the press here.
Posted by Carrie Etter at 3:39 pm No comments: 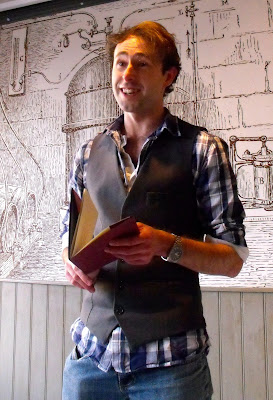 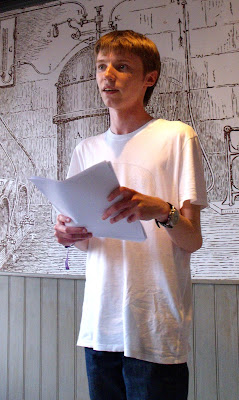 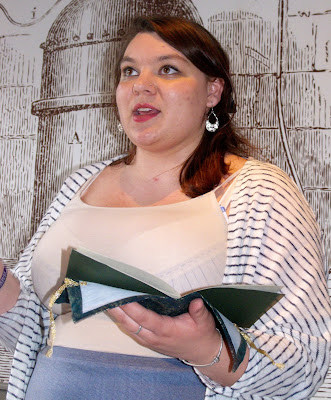 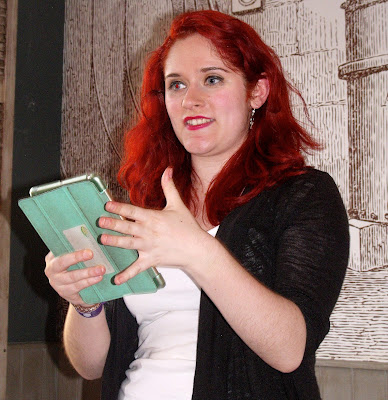 
Posted by Carrie Etter at 9:15 pm No comments: