I'm surprised and delighted to see that Nathan Thompson, who gave Claire Crowther's Stretch of Closures a vaguely negative review in Stride, has now admitted he did not read the book closely enough and has posted a re-review here at Gists and Piths. Was his conscience nagging, or the fact of his forthcoming book with the same publisher? Regardless, it took courage, and I admire that.
Posted by Carrie Etter at 2:01 pm 4 comments:

Two Days for the Victims

Let's start small. Yesterday I received word that the defendant--the dentist whose overfilling of my root canal and use of a toxic sealant has left part of my face permanently numbed, permanently pained--increased his damages offer so that, while my solicitor will try to increase it somewhat further, it's good enough to settle at and not go to court. Partly I'm relieved, pleased; partly I feel like it's feeble compared to a lifelong disability. I'm going to look into having laser eye surgery, so it feels like some equivalence has been found, however rough.

Now, going large: Today I phoned home to learn that a Chicago law firm has taken up my father's case for medical negligence. Since the negligence and consequently his paralysis occurred in February '07, my parents have paid out of their retirement money for everything Medicare won't cover. That has resulted in my father receiving only intermittent physical and occupational therapy, such that what progress he gained in a physical rehab facility last year has been mostly lost. Anyway, my parents engaged a local lawyer, who then, given the size of the case, approached two Chicago law firms with the capacity to carry such a case out. The first said no, but this one said yes, and soon, soon I hope, Dad will receive better care and restitution for all the money they've spent. This is the best news we've had in a long, long while.
Posted by Carrie Etter at 8:25 pm 3 comments:

I'd be very interested to know what others think of this strange, interesting poem. You can read it here.
Posted by Carrie Etter at 11:28 am 4 comments:

Some passages from the book--


one
of those saints that have the gift of dreaming right

We have been poised a long time
like souls--like birds that practise
their songs in their dreams.

I fold nature into
my gently bewildered body
as a girl leaves her hair
open to be enjoyed
by the moon's fine touch.

"To Compress Her Two Childhoods"

her tar-distilled crimson,
her coal-derived blues

Now her long hair
has a silent way of calling, immediately
knotted to the whole brown city.

"Angel of the Countenance"

She is a room of the months
conceived between battles--

She saw her body alone,
without a soul,

and felt as if one in five birds had flown out
from behind the garden of her spine.

his face lit up
immoderately, as if he were one of the highest
angels who are all fire.

the evenness
of the day when there is no
weighing

secretly turning the hour glass
in my pocket for its gruesome,
sweet infinity

"My Sister's Way to Make Mead"

"She Thinks She Sees Clarissa"

while language comes in, on duty
and on time, shredding newspapers,
with its killing bite, its quiet bite,
its starling style

"The Dependent Nature of Lines"

doors of lawless scarlet,
a purple that can be tied

After wearing his name, shining, unbruised,
in this world of abrasion

Posted by Carrie Etter at 12:32 pm No comments:

A painting with a note from Sara, age 5 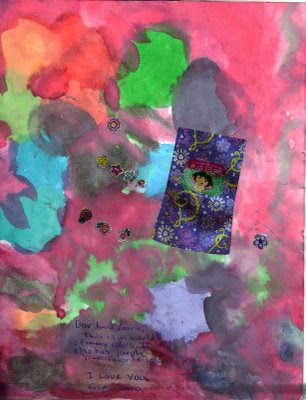 (Purple isn't my favourite colour, but my nieces and nephews tend to think so because I have raised them in my tradition of shouting for the purple fireworks on Independence Day.)
Posted by Carrie Etter at 1:05 pm 1 comment:

From Joy Harjo's blog: http://joyharjo.blogspot.com/2008/09/sarah-palins-record-on-alaska-native.html. It's a predictably devastating account.
Posted by Carrie Etter at 12:45 pm No comments:

From the cliff edge, you discern your reflection sixty feet below: and it beckons. You call yourself down, into the sea; your face appears neither eager for the dive nor sorrowing toward suicide. Its very casualness seduces, implies that a step into air would entail no more danger than a step over ground. Memorise this image, that expression. This is your destroying angel, and yes, sometimes he wears your face.

I want an Obama t-shirt!

Anthologizing (the Shearsman one)

Over the last few days I've been finalizing selections for the other women's poetries anthology I'm editing for Shearsman, and it's been exciting. Andrea Brady sent me the whole of her forthcoming second collection, Presenting, and it was a delight--fiercely intelligent, rigorous, and compelling; the book comes out from Salt in February. Other selections finalized came from Redell Olsen, Wendy Mulford, Marianne Morris, and Frances Kruk; I've previously selected work from Carol Watts, Anne Blonstein, Sascha Akhtar, Zoë Skoulding, Claire Crowther, Elisabeth Bletsoe, Lucy Sheerman, Frances Presley, and Harriet Tarlo. I'm delighted with the quality and range of work.

And at last I have the opening part of the title: Infinite Difference. What do you think?
Posted by Carrie Etter at 9:53 pm No comments: