Click to see this picture enlarged and the wonderful expressions on their faces better. 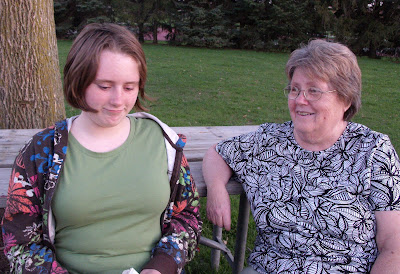 My niece Ella White (formerly Katelyn Etter) with my mother, Bernie.
The shirt's she wearing is one of the ones I kept.
He had no idea what he looked like to others. He wasn't sure what he looked like to himself. He looked like what his mother saw when she looked at him. But his mother had passed on. This raised a question for advanced students. What was left of him for others to see?
Don DeLillo, Point Omega
Posted by Carrie Etter at 5:32 pm No comments:

Come one, come all! 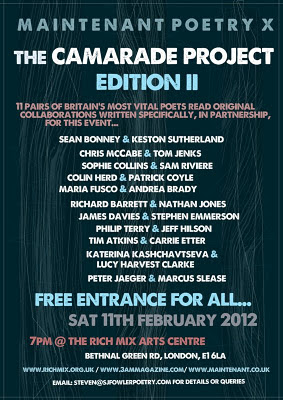 Posted by Carrie Etter at 11:19 am No comments:

Halfway in, I'm finding The Bloods a tremendous book, evoking and exploring questions about language, slavery, mortality, epistemology, and so on. Here are some samples from my reading thus far. (The spacing is at times incorrect, I'm sorry to say, on account of this platform.)
In a poem, silence sounds like a gunshot.
To the flame darkness is an offering....
from "Lorem Ipsum"
Beyond water
with its blue-black punctuation beneath
fraying charts of light.
* * *
And then, amid the pages,
syntax, weft, memes, no order or world. Suddenly the
illuminations burn, perish on the white page
with its pathos night after night.
* * *
Still later I think it makes sense that language should
lead back to death and silence
devote itself to the erased letters of the air,
a flight so inviolable it has little chance
of existing beyond the natural life of a poem.
from "Greeking"
Release the words from their trap,
but don't forget to nuance the meaning.
This is where true ownership begins.
A hand scratching worth from zero.
from "Hoerenjongetje"
...the sound of the wind
that is the sound of the mind falling....
* * *
Whatever it was, the dark
held him motionless, unheralded,
oblivious to the drugs and to the sex,
the false divinities,
the dead sleeping next to other men.
from "Acque Pericolore"
Now the truths proposed by truths feel like the prison of old age.
from "An Emblem Book"
...small chunks
of time instantly duplicate themselves
with brutal honesty....
* * *
oh to be a child again, dying without knowing it,
the dark so very quiet because ephemeral
and the void a stench almost too solid to touch--
from "Diglossia"
It is quiet as I stand watching the straw-red lips of a child, perilously perfect, surrounded by darkness. The world will choke me before this image fades. It rises sheer with a thrashing force. Time reels from the impact.
from "Fish--Apostrophe"
...how to speak the undamaged word.
from "Pot Kettle Black"
The gulls return through coastal mist, a raucous blur. As they veer past he hears a kind of cadenced longing hovering on the edge of his inner ear.
* * *
The fear . . . that the nausea he felt would bear down with a verifying force . . . .
* * *
The rain had slowed and the houses with their crested roofs looked stripped and ravaged in the greying landscape.
* * *
There was something in the life of a slave he thought, something similar to what the world owed him, a world that had forced him to wallow in spectacle and evocation. As he looks out over the hills to the sea, he thought about the power of imitation, but he didn't know that behind him the slave too was concentrating on creating a new form. He'd been cautious, watchful, but all the while he'd been learning how to shape the junk and miscellaneous things scattered all about them into new forms. And so, little by little, his dreams started to encroach upon the waking world.
* * *
If the moon went out, there would always be this light that feels unceasing, flickering below the flight of gulls climbing on divergent paths, over blackened fields.
from "Whittling, A Likeness without Shade or Shadow"
If you enjoyed these passages, I hope you'll buy the book from Foyle's (UK) or Barnes & Noble (US).
Posted by Carrie Etter at 4:17 pm No comments:

Kelvin Corcoran's Words Through a Hole Where Once There Was a Chimpanzee's Face (Longbarrow Press, 2011) 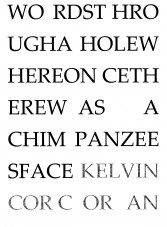 Kelvin Corcoran's pamphlet explores in poetry and prose his harrowing experience of a stroke and his recovery, divided between the sections "Going Down" and "Coming Back." His reading of the entire piece at the Hay Poetry Jamboree was a delight, taking us through pain, bewilderment, fear, love, laughter and literature. Here are some favourite passages:


Massing for blood honey sweet
the nations of the dead and you
sifting through my hands--a shadow.

These trees look designed,
them birds is on fire
in loops and swirls the sky ablaze.

from "He stared at death. Death stared straight back."

The chapter of the raising of the body,
of making the eyes to see, the ears to hear,
setting forth the head, of giving it its powers
coming forth from yesterday, coming forth by day.

...the mind making its own patterns
along a low horizon of muted light.

...to walk away from the buried life,
the trees designed and the light contrived.

And if I was looking for that cold cold answer,
in the last brilliant compartment of the sun,
the church bell would ring out its contours on the air
compressing the water to picture a polar sky.

Rolling out the sound condenses over ice,
sea smoke trails the boat, twists of light letter the air,
a language holding low around the edges of the world,
empty and endless for the mind to lodge at zero.

Today Nansen you will study the sea running flush under the transparent shelves of vision.

You--pathfinder genius, limbs and head full of souls, lead us out on the thin skin of the unthought world, step by step to the oracles of snow; beat it out, beat it out and we'll follow.

from "2.3 Another Eight Things About the Arctic"

...a cantata
on the other side, deep in dark wood rising.

...the horizontal wind rolls up the European plain,
smacks the spire from the past into the future
to release a little aria dancing over Saxony.

...the one word [love] to bring to that moment,
the only thing to hold onto at the dark door.

The air's a chamber of bird song and rain....

Yesterday a girl atop a white bull
went swimming past, Europa, the fool.
What sort of prospect is that?
Oh his sweet breath, his low moan.

Telemetry, telekinesis, Telemachus, holy shit.
Tell me another one, I thought him dead but he's back;
I thought him white bones cast on black sand,
his grin from the photo I inherit--and a world of trouble.

He smells of smoke, drops into deep sea silence,
controls his face at sudden sounds, eyes wide.
What does it take to hollow out a man?
Black bones on white sand, his voyage, my voyage.

...when he sailed off,
I poured my heart into a hole in the air.

Every night I talked and talked to an absence....

...the sea won't stop moving, the land now and then;
but here I am, I hold my nerve, I make it happen.

You can pick up the pamphlet from publisher Longbarrow Press for a mere five pounds; add the CD of the poet's reading of the work and it's just £6.50.

Email ThisBlogThis!Share to TwitterShare to FacebookShare to Pinterest
Labels: CD, Hay Poetry Jamboree, Kelvin Corcoran, Longbarrow Press, pamphlet, stroke, Words Through a Hole Where Once There Was a Chimpanzee

includes this one! What a delight and an honour! Here's the complete list, along with notice of the winner, Time's Flow Stemmed.
Posted by Carrie Etter at 9:48 am No comments:

I've just finished reading the latest collection from Geraldine Monk, Lobe Scarps & Finials, and warmly recommend it. While some of the poems worked more for me than others, on the whole I relished its playfulness and good humour, its chattiness and range of register, and concur with David Wheatley's thoughtful review in The Guardian. Here are just a few choice passages:

Rock runs to slurry.
Earthquakes cakewalk the
globe and back.

...everything was elsewhere and
being England it was cloudy.

Colder. Wetter.
Perseids a proper shower
hurtling a best-in-years
outta-sight and
being England it was cloudy.

How greener is the other side of the
body incorruptible?

I'd quote more if I could replicate the spacing. You can buy the book directly from the publisher here.

Posted by Carrie Etter at 3:43 pm No comments: