my mother with her grandson Brandon Etter and granddaughter Sara Cummings

You are daily, horribly missed.

Posted by Carrie Etter at 8:38 am No comments:

I stumbled onto a stack of new copies of this book at the Albion Beatnik Bookshop in Oxford last week and was surprised at the counter to be charged £4. 'How'd I get so lucky?' I asked. 'Look at all that stock,' was the response. So if you enjoy the passages below and would like to get your own, I recommend visiting or phoning the Albion Beatnik. I must say, though, I prefer Cole's earlier volume, What Is Doubled, which is less sententious and heavy on end rhyme than Things on Which I've Stumbled.

Here are some of my favourite passages from this volume:


Not just the past ascending into
the present of a given seeing,
but that present itself collapsing
into the voices speaking to it--

so that the current, mixing, becomes
duration which one, mostly, lives:

Cut off by worms and time--
as we will be,
and are

Thus the poet responds
to cruelty
song the product of exigency

how language's lightning in the sentence is won . . .


from 'Things on Which I've Stumbled'

. . . my own slug-like conscience,
moving along by, it seems, contracting
against itself. The slime and motion inching me
toward the sublime, through confusion, like wheat.

Bad translation
is like drawing a bucket from a moonlit
well--and losing the silvery shine on the surface.

There is a power
rinsing spirit with detritus, like a tide.

In an extension of the mind, nearing its
limits--deltas of twisting branches forking
finely toward a pewter sky, shifting as
roots of those trees descend through silt, to sewage
and clay. There, Solomon said, are spirits.

The dervishes turn on axes as old
as earth's, but pointing toward their own tombstones.
Within their shroud-like cloaks and skirts they spin.
I'd gone thinking I'd see a hackneyed thing,
then watched my heart's arms like their dance unfold.

from 'Notes on Bewilderment'

from 'The Ghazal of What He Sees'

The army has nearly written a poem:
You'll now need a permit just to stay home.

from 'Coexistence: A Lost and Almost Found Poem'

. . . when things were good,
it seemed there was more
air within than without. 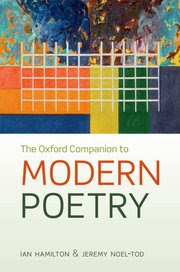 When I returned from Oxford yesterday, I had a happily large stack of post waiting, and this book was the most exciting piece. Last year, working with co-editor Jeremy Noel-Tod, I composed six entries for this new edition of The Oxford Companion to Modern Poetry: Andrea Brady, Forrest Gander, Laura Kasischke, Tim Liardet, Frances Presley and Catherine Wagner. Summing up a career and describing a probably evolving poetic style (as all these authors are alive and wonderfully active) in a few hundred words proved more arduous and time-consuming than I anticipated. At the same time, I enjoyed improving my knowledge and understanding of their work.

The experience of writing the entries also gave me one of my most rewarding exchanges with an editor. Noel-Tod provided an ideal balance of guidance and leeway (for lack of the better word escaping me), and while I expect editing such a large work with so many entries and contributors will dissuade him from any more editing for a while, I hope another, perhaps smaller opportunity to work together in this capacity will come again sometime.

I think I've been put off from doing many of these 'Current Issues' entries by people posting news of their acceptances for publication on Facebook. I understand so well the excitement and pleasure such an acceptance brings and often feel the impulse myself to make such posts, but I feel uneasy with self-promotion that I force on people's notice. Here on the blog, I figure only those interested will come by to read what I'm up to, but even so, I don't want to sound like I'm bragging. *sigh*

So I'll thank the editors of Ambit, Molly Bloom, New Walk, Poetry Wales and Shearsman for their support of my work by choosing poems of mine to appear in future issues. I'm most grateful.

I've long known of Interim magazine and found my interest revived when I learned some years ago that Claudia Keelan, a poet I admire, had become its editor. I've picked up issues of Interim at AWP over the years and am passing through them again before I give them away (I'm reluctantly giving loads of magazines and books away on account of my forthcoming move to a new office, where I'll have 2.8m of shelf space).

...a god in worn-out dungarees,
reordering the universe of dark and light with huge paint-dappled hands....

Earl Coleman,  from 'On the Day His Lease Expired'

We wanted it come to rest tied up on the craps table,
so we would feel so very money storm then.

Turn to the task

and turn it again.

gone in an instant

the complex of time

Not the mighty dead

with whom you are wont to wrestle

but the humble dead

Days such as these

the presentation of events

is owned and disowned continually

in the poet's search.

and its concomitant emotions

and its concomitant ideas.

of the text or act of love

to the text or act of love

So that the consolation

out of a certain logic

built into the syntax

Built into the body

though "Deathward we ride"

awaken without casting off sleep

But the present is

not sufficiently distant for observation.

Gordon Hadfield, from 'Via Soma'

bellwether to dust's watering hole
the horses the sheep the cows the fowl
emaciate, the vultures' virtuous compass

So that it does not matter

if name sing here or not:

what is a name inside oblivion?

Which is all to say I feel the distance between
how the mind I call 'my'
used to be then
and is now.

A lovely skinny pamphlet with the subtitle, 'Stone landscapes of Inishmore and Burren, May 2010'. Here are some favourite passages:

And sing still and louder sing,
Psalmic impulsions rolling over the moor
Seeking an imperfect cadence.

Where is the musician or architect
Who built me this weary smile?

Saw everything from there, the rich
And the poor, the cloud descending,
The cattle driven over the cliff.

For there are answers to fear,
Common or garden,
That singing up the coast.

You can get the pamphlet for £3.50 by buying it directly from Leafe Press.
Posted by Carrie Etter at 10:00 am No comments:

and gather into cloth.

Like Persephone I have left my mother behind.
You, with your precision, would claim that she has left me,

but her death was neither her choice nor mine.

I enter the silence around me: its space grown large and doorless,
denser than fur
or feathers thick at the breast--
paths lead elsewhere.

Not all silence is retraction,
its intentionality allied with small cruelties.

And the planet veers through space, resembles an afternoon in Los Angeles

...baffled until combed into pattern.

...words retract into her mind, repeating,

from '(lash of the tongue)'

from 'These Spare Objects'

time lies flattened,
stretched into a hoop:
pricked
into lapsed
panoramas--chinks
among cracks--crevices
opening so that

Though beauty unconsidered
seems like light or distance
in relief: a flight

And because there are two of you,
time shutters open, just as now removes itself to then,
shedding on its way details--

patterns of light, and story-telling, absurd and restless.

like love, a construct conjured from the body's
hungers, or spun off
from the wholeness of the planet,

the third section of 'The Hunt'

The silence between syllables hangs like a question mark

and, so, touch between us melts into a brief deferral of motion.

Further information about Hoard, and numerous links to purchasing it online, are available here on the Shearsman Books website.
Posted by Carrie Etter at 10:00 am No comments: