Today's the day I depart for the Dylan Thomas Centre to give a workshop using Thomas's notebooks and a reading. I finished rereading the Collected Poems just in time--though I think I may have drawn the reading out for the sake of making it last. Here's the last round of splendid passages.


My silly suit, hardly yet suffered for,
Around some coffin carrying
Birdman or told ghost I hung.

Now shown and mostly bare I would lie down,
Lie down, lie down and live
Quiet as a bone.

from "Once Below a Time"

No Time, spoke the clocks, no God, rang the bells,
I drew the white sheet over the islands
And the coins on my eyelids sang like shells.

last lines of "When I Woke"

O keep his bones away from that common cart,
The morning is flying on the wings of his age
And a hundred storks perch on the sun's right hand.

Under the mile off moon we trembled listening
To the sea sound flowing like blood from the loud wound
And when the salt sheet broke in a storm of singing
The voices of all the drowned swam on the wind.

...the splashed mothering maiden
Who bore him with a bonfire in
His mouth and rocked him like a storm....

For I was lost who have come
To dumbfounding haven
And the finding one
And the high noon
Of his wound
Blinds my
Cry.

The world winding home!
And the whole pain
Flows open
And I
Die.

from "Vision and Prayer"

And he who taught their lips to sing
Weeps like the risen sun among
The liquid choirs of his tribes.

from "Ballad of the Long-Legged Bait"

And nothing I cared, at my sky blue trades, that time allows
In all his tuneful turning so few and such morning songs,
Before the children green and golden,
Follow him out of grace,
Nothing I cared, in the lamb white days, that time would take me
Up to the swallow thronged loft by the shadow of my hand....

Oh as I was young and easy in the mercy of his means,
Time held me green and dying
Though I sang in my chains like the sea.

from "Fern Hill"
(which I would have liked to copy entire)

Sanctum santorum the animal eye of the wood
In the rain telling its beads, and the gravest ghost
The owl at its knelling.

All tell, this night, of him
Who comes as red as the fox and sly as the heeled wind.

from "In Country Sleep"

And on seesaw sunday nights I wooed
Whoever I would with my wicked eyes,
The whole of the moon I could love and leave....

Whatsoever I did in the coal-
Black night, I left my quivering prints.

And the daughters of darkness flame like Fawkes fires still.


last line of "In the White Giant's Thigh"

You can buy Dylan Thomas's Collected Poems from Foyle's Books for a mere £7.49 here.

Posted by Carrie Etter at 9:42 am No comments:

Kei Miller's The Cartographer Tries to Map a Way to Zion (Carcanet, 2014)

I don't think these passages can demonstrate how strong this book is, but here's a taste nonetheless:


Allow your knees
and then your forehead an intimacy
with stone; know your ground.

...touch
this kneeling crowd--the tarmac
soft against the substance of its faith.

And foot
by weary foot, they found a rhythm
the measure that exists in everything.

from "Establishing the Metre"

...maps which throughout time have gripped like girdles
to make his people smaller than they were.

And how much life is land to which
we have no access? How much
have we not seen or felt or heard
because there was no word
for it--at least no word we knew?
We speak to navigate ourselves
away from dark corners and we become,
each one of us, cartographers.


from the title poem

...nights are loud
with the shrugs of lizards.

end of "For the Croaking Lizards"

...you will discover that when victims live long enough they get their say in history....

You can buy The Cartographer Tries to Map a Way to Zion for 10% off directly from the publisher.

Posted by Carrie Etter at 11:34 am No comments:

Email ThisBlogThis!Share to TwitterShare to FacebookShare to Pinterest
Labels: Carcanet, Kei Miller, The Cartographer Tries to Map a Way to Zion

A rave review of Imagined Sons at Writers' Hub

Poet and critic Valeria Melchioretto has given Imagined Sons a rave review at Writers' Hub. Here's one passage: "The emotional intensity of the limbo between hope and disappointment renders these poems unforgettable. The images conjured are a balancing act between the mundane and the utterly bizarre and the notion of the uncanny is never far."

Before Imagined Sons came out, I'd forgotten how much pleasure it is to take a new book to audiences and feel such gratification in their attention and appreciation. Now I've read from the book in--wait, let's do the t-shirt version:

Here are the scheduled readings yet to come:

So it seems I'm just past the halfway point. I feel the quality of my readings from the book has improved over the ones I've already done, and I've learned a lot about what it takes to be a good reading organizer and host. One organizer failed to mention that I had books available for sale, but nearly all of the others have given me moving introductions and done their utmost to promote sales. Dennis Harrison at The Albion Beatnik Bookshop in Oxford even asked what kind of wine I liked so he could get some in!

One thing I hadn't expected was how many people approach me or buy the book because they or someone they know is an adoptee, adoptive parent, or birth parent. People want to tell me their stories, some right then, some later via email or Facebook, about their own adoption experiences. Sometimes the stories are sad ones, such as women being forced to give up their babies, while others are heartening tales of reunions of birth parent and surrendered child. If I'm just halfway through, and the reviews are just beginning to appear, I have many more stories yet to hear.

Posted by Carrie Etter at 10:59 am No comments: 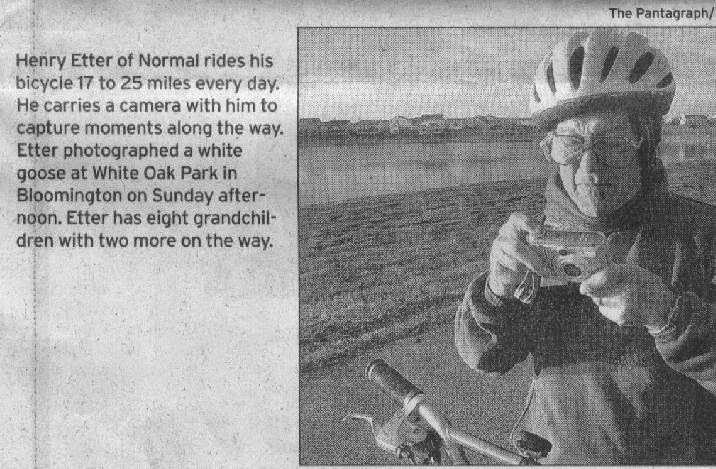 Ten years ago, this photo of my father appeared in the local paper. He often cycled into the country as well as by the manmade lake not far from his (our) house. Here he's mentioned as having photographed a white goose, and I know he often took bread with him on his rides to feed them.

He never--never--spoke an unkind word to me, in spite of those I spent on him (mostly as a teenager, for what little grace that offers me). Dad, every day my life is less without you.

Posted by Carrie Etter at 10:47 pm No comments:


Bread and milk mansion in a toothless town.

I make a weapon of an ass's skeleton
And walk the warring sands by the dead town,
Cudgel great air, wreck east, and topple sundown....


from "I Make This in a Warring Absence"

If my bunched, monkey coming is cruel
Rage me back to the making house.

...the still hour
Is come of the sea tumbling in harness

After the first death, there is no other.


from "A Refusal to Mourn the Death,
by Fire, of a Child in London"

I rose
In rainy autumn
And walked abroad in a shower of all my days.

It was my thirtieth
Year to heaven stood there then in the summer noon
Though the town below lay leaved with October blood.

from "Poem in October"

Unluckily for a death
Waiting with the phoenix under
The pyre yet to be lighted of my sins and days....

opening lines of "Unluckily for a Death"

from "Into Her Lying Down Head"

Though wise men at their end know dark is right,
Because their words had forked no lightning they
Do not go gentle into that good night.

from "Do Not Go Gentle into that Good Night"

And his nameless need bound him burning and lost

In that far ago land the door of his death glided wide,

And the bird descended.

from "A Winter's Tale"

Silence, silence to do, when earth grew loud,
In lairs and asylums of the tremendous shout.

Exiled in us we arouse the soft,
Unclenched, armless, silk and rough love that breaks all rocks.

from "There Was a Saviour"

(Imagine all of "In My Craft or Sullen Art" here. I want to memorize it.)

Begin
With singing
Sing
Darkness kindled back into beginning
When the caught tongue nodded blind,
A star was broken
Into the centuries of the child
Myselves grieve now, and miracles cannot atone.

And the dust shall sing like a bird
As the grains blow, as your death grows, through our heart.

Love is the last light spoken.


from "Ceremony after a Fire Raid"

A copy of Dylan Thomas's Collected Poems is a mere £7.49 from Foyle's Books.

Eileen Tabios has reviewed Imagined Sons at her poetry review site, Galatea Resurrects. Here's a passage: "But Imagined Sons is also important for showing how craft allows for the effective portrayal of a loss so expansive it could easily wriggle out of control into poetic “laxness” (for lack of a better word; I have read a lot of poems by those touched by orphanhood and/or adoption and many simply sag under the weight of the topic).  In this sense, too, Etter was wise in choosing the prose poem whose form allows the suppleness required for such a fraught topic.

Here’s another example from a book that deserves to be read in its entirety—this example reveals the utter fearlessness of Carrie Etter (whose lack of timidity here honors Poetry), and how, sadly, the downside of not knowing is that one can imagine anything [...]."

You can read the whole review here.

Posted by Carrie Etter at 12:39 pm No comments: