Up for trying to write a poem a day in April?

America's National Poetry Month has come round again, and as the results last year--both for me and those who joined me--were so positive, I'm trying again this year to write a poem a day for the month of April. Four of my six MA students--Alia Brinkman, James Evans, Jenny Martin, and Simon Reynolds--have already agreed to join me--other takers?
Posted by Carrie Etter at 9:29 am 9 comments: 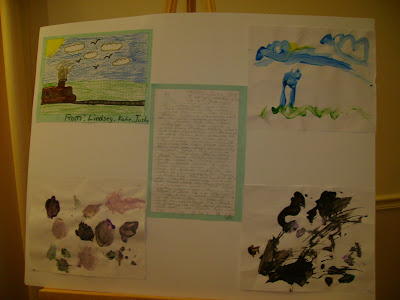 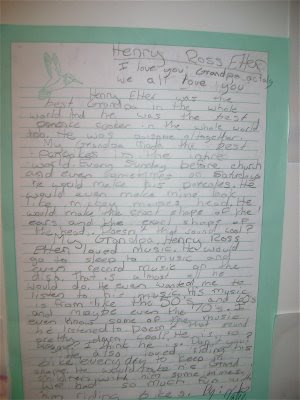 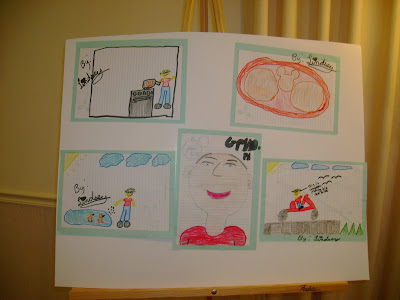 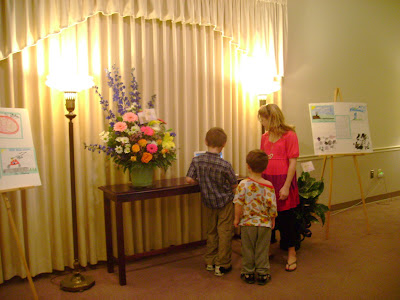 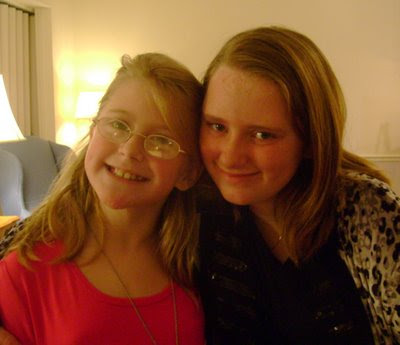 Lindsey and Katelyn, cousins and sisters
(one of our many long stories)
At Carmody-Flynn Williamsburg Funeral Home, Bloomington, Illinois
Posted by Carrie Etter at 8:00 am No comments:

Sara's gift for my birthday 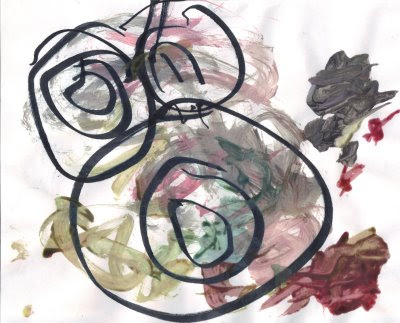 Posted by Carrie Etter at 8:25 pm No comments: 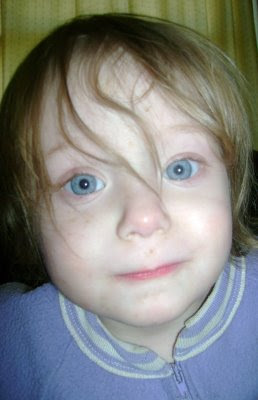 My niece, two years old come July
Posted by Carrie Etter at 8:00 am No comments:

Battlestar Galactica comes to an end

Read the appreciative cultural overviews by The New York Times and The Guardian.
Posted by Carrie Etter at 8:00 am No comments:

Siriol's a friend, so as with Claire's book, I'll post a poem in lieu of the review I can't give.
Willow Pattern
Each afternoon he walks me ragged,
paths dusty with catkins, fleshy
and sulphurous, a tapenade of grief.
It's the same old story:
towers and crooked fences,
a waiting boat, le pont des suicides.
Even the birds are dropping.
We begin where we end.
These trees with their blue leaves
have survived beyond imagining.
Siriol Troup
Beneath the Rime (Shearsman, 2009)
To buy the book in the UK, click here for Shearsman's online store.
To buy the book in the US, click here for the link to Amazon.com.
Posted by Carrie Etter at 8:00 am No comments:

Email ThisBlogThis!Share to TwitterShare to FacebookShare to Pinterest
Labels: Beneath the Rime, Siriol Troup

His obituary, as it appeared in The Pantagraph on 15 March 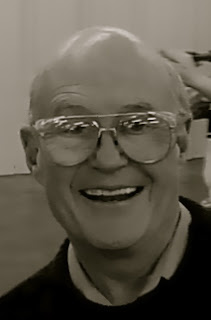 NORMAL - Henry Ross Etter, 68, of Normal died at 3:44 a.m. Friday (March 13, 2009) at his home. His celebration of life gathering will be at 11 a.m. on Tuesday (March 17, 2009) at the GE Clubhouse on GE Road in Bloomington with Chaplain Stephanie Soon officiating. His family will receive friends from 4 to 7 p.m. on Monday (March 16, 2009) at Carmody-Flynn Williamsburg Funeral Home, Bloomington.
In lieu of flowers, memorials may be made to OSF Hospice.
Henry was born Sept. 26, 1940 in Washington, D.C., the son of Lorton Dale and Mary Lane Stanton Etter. He married Bernadine Meeker on June 18, 1966 at Holy Trinity Church, Bloomington. She survives. Also surviving are five daughters, Carrie Etter, Bradford on Avon, England, Laura (Reggie) Wallace, Bloomington, Nancy (Scott) Cummings, Stanford, Sandra (Charlie) Casperson, Bloomington and Joanna (Bryan) Perschall, Bloomington; and 12 grandchildren, Lindsey, Justin and Nathan Wallace, Matthew Cummings, Brandon Etter, Sara Cummings, Austin and Kaylee Lusher, Joslynn Casperson, Katelyn Etter, and Alex and Andrew Perschall. He was preceded in death by his parents.
Henry grew up in St. Louis and received a BS in journalism and political science from Washington University there. On graduation he was employed as a reporter for the Daily Pantagraph and later became Director of University Information at Illinois Wesleyan University. In 1970 he became editor of the Daily Reporter at General Electric in Bloomington and enjoyed the position for 13 years, proceeding to the position of catalog editor before he retired in 2002.
Over the years, he also served on the boards of the GE Credit Union and Oakdale School's PTA, and along with his wife, he was active in Marriage Encounter through the Peoria Diocese. An avid cyclist, Henry rode 25 miles a day before his illness; he was also a great enthusiast for rock and roll trivia, meteorology, camping and trains.
Posted by Carrie Etter at 6:41 pm 2 comments:

Email ThisBlogThis!Share to TwitterShare to FacebookShare to Pinterest
Labels: Dad, obituary, The Pantagraph

Dad leaves the weather channel on while he ferries
garbage cans to the yard’s edge,
the dead leaves cracking under his feet.
Though September, a Tornado Warning could
beep across the screen. Or a Severe Thunderstorm.
Get the cats inside. I can prepare,
crank the windows, huddle in the basement.
Preparing or stalling, Dad cycles
thirty miles a day; he alters the route
from one sequence of prairie roads to another.
Only change ceases to change.
He phones to give me an update.
I’m in Los Angeles, Dad. What weather?
He explains the specifics:
dew point, wind velocity, cloudcover.
When I move, he’ll delight in new territory to monitor.
He may not be able to control
the sky, but he knows the forecast.
His birthday is Monday.
I sense tornado weather
in California—ridiculous,
even the season is wrong—
yet the sky darkens, the chimes clatter-sing.
When I was six, a tornado sought
our train, I resisted hiding
in the ditch, I stood on the bank
and watched the black
a hundred yards off till Dad yanked
me down. On the birthday card I write,
Wish I could be there. Illinois:
I see a tornado approach, oh
far off, far off. Dad walks up beside me,
chatting the facts: the distance, its speed.
I grab his hand,
I fix him to the earth, glaring forward
He’s mine he’s mine he’s mine
while Dad states the shortened distance,
the heightened speed, how
black, how black it is.
written September 1994

please be alive when I get there.
Posted by Carrie Etter at 2:17 pm No comments:

Every two years Compassion in World Farming studies the practices of UK supermarkets for their treatment of animals. Clicking on this entry's title will take you to the details, but here's the basic ranking:
1. Marks & Spencer, winner of the Compassionate Supermarket Awards 2007
2. Waitrose
3. The Co-operative
4. Sainsbury's, winner of Most Improved Supermarket and Best Volume Retailer 2007
5. Tesco
6. Morrison's
7. Somerfield
8. ASDA
I'm concerned, though, that in this recession a supermarket's prices will be the major (and perhaps only) influence on people's choice of supermarket.
Posted by Carrie Etter at 2:50 pm 1 comment:

A fellow writer-friend asked me for recommendations on what she should do on her forthcoming trip to Chicago, and as I love the city, I thought I'd share them here.
"In Chicago you must
1) go hear blues music. A couple places to go are Legends and Kingston Mines. If you're staying with friends, ask them. Different people have different favorites. One performer I really liked on my last trip was Joanna Connor, a big girl who can play Hendrix, Cream, trad blues, etc.
2) have stuffed and/or deep pan pizza at Gino's East, touristed for a reason. A recent MA also recommended Giordano's.
3) go to the Art Institute of Chicago. Take a journal and spend the day. When you feel saturated, head to the cafe for a break and start again when you're ready. It's outstanding and overwhelming.
4) go to Rush Street if you're looking for bars or just some variety.
5) go to The Cheesecake Factory if you like/love cheesecake. The turtle cheesecake (chocolate, caramel and pecans) is my personal favorite. Divine. Plus the restaurant food is gorgeous (the jambalaya and the Factory Burger are a couple I'd recommend) and served in quantity, to say the least.
6) check out the bookstores near the University of Chicago--Powell's is great for used books, The Scholars' Co-op for new. Set a budget and expect to break it. For events &c. I've heard Women and Children First bookstore is a place to go.
7) when you're in the University of Chicago/Hyde Park area, find The Dixie Kitchen and Bait Shop for delicious Southern food.
8) for a wonderful breakfast of any kind--crepes, french toast, pancakes, omelettes, etc., etc., go to Yolk. Freshly, ideally made, with large portions and good prices. On weekends it's best to go early or you'll have a wait."
I'd be glad to hear about others' favorite Chicago places, restaurants, etc.
Posted by Carrie Etter at 3:56 pm 3 comments:

24 Series/Season 7 Is An Advertisement for Torture

I've enjoyed the show, so I wish it weren't true, but episode after episode makes the case for torture even after the U.S. military spoke to the show about how futile torture is. The case is so relentless it's almost unbelievable.
Posted by Carrie Etter at 11:26 pm No comments:

Email ThisBlogThis!Share to TwitterShare to FacebookShare to Pinterest
Labels: 24, torture

"Ghost and His Easter Egg House" by Sara Cummings 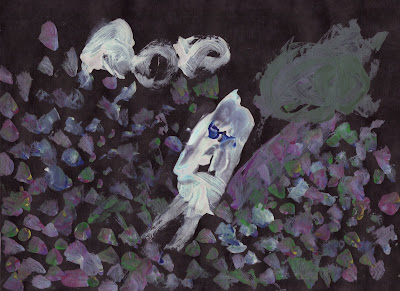