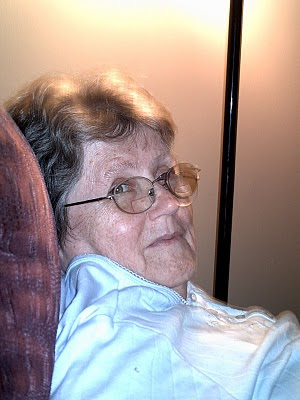 This is the last picture I took of her, sitting at the other end of the couch from me. Without thousands more words, I can't describe the extent of my loss.
Posted by Carrie Etter at 9:12 pm 2 comments:

Email ThisBlogThis!Share to TwitterShare to FacebookShare to Pinterest
Labels: Mom 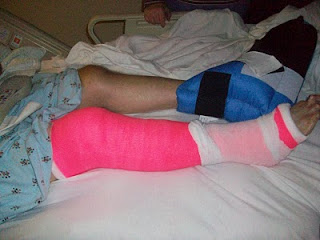 the hot pink cast
Twenty-five things about my father:
1. When the rehab facility broke his leg, he asked for--and got--a hot pink cast for it.
2. He loved cashews and Fannie May's dark chocolate vanilla buttercreams.
3. He gave me his father's poetry notebooks.
4. He was laid off from General Electric when I was 14. We spent 3 or 4 years under the poverty line, as he was considered overqualified for most positions and could only find occasional work, before GE rehired him through a temporary service agency, at half his previous salary.
5. He grew up in St. Louis. When driving, he often didn't fully stop at a stop sign; he called that a "St. Louis stop."
6. He used to enjoy CB radio and served as an emergency contact, listening on the emergency channel for a certain period once a week in case any calls came in (clearly in the days before mobile phones).
7. As someone from St. Louis, he loved the Cardinals. When he took me to my first Cardinals game, he warned me that baseball could be boring sometimes. The Cardinals won 7-4 against the Cincinnati Reds in extra innings, and later that year the Cardinals won the pennant.
8. He was always unsure about gifts and would ask my and my sisters' advice about presents for Mom.
9. He used to try to do as many car repairs as he could himself, and growing up, my sisters and I often heard him through the door linking the garage and kitchen as he cursed.
10. He picked up some sort of calisthenics program in the 60s and did it every morning Monday to Friday in the garage (until his injury, anyway).
11. He was noisy about his pain. He would literally call out, "OW! OW! OW!"
12. He held me, at three months old, in front of the TV to see the moon landing.
13. He made claims against Republicans without invoking any examples or evidence; one Christmas I gave him The Bush Haters' Handbook in the hope he'd use it for support.
14. He snored. Really loud.
15. He loved Bill Haley and the Comets and John Stewart. Those were the two sides of his music taste: rockabilly and folk rock.
16. He didn't drink much, and when he did, it was cheap stuff, either sweet wine from a box or Icehouse beer. He would, however, gladly partake if I was making amaretto sours or the like.
17. In one of our last conversations, he told me how proud he was of me. I interrupted to stop him, and he said something like, "No, no, now listen."
18. When he was delirious on morphine the last night of his life, I don't know whether he called out hari kari (least likely), Harry Caray, the name of the famous Cardinals broadcaster, or Hurry, Carrie.
19. The last signs of consciousness we saw in him were seemingly reactions to the rockabilly music on the satellite TV-radio channel--partial smiles &c.
20. I was always joked that, having five daughters, he related to us by introducing us to sci-fi, but I was the only one with whom it took. We went to a number of Star Trek movies together and commented on Next Generation and Voyager when we caught up on the phone.
21. He loved cycling and cycled 20+ miles a day for years before his injury in 2007. Sometimes, when I could be persuaded, we cycled out into the country together. He cycled so much that the local paper used photos of him for its "local moments"-type feature on three different occasions.
22. He would talk a stranger's ear off, whether the waiter, a gas station attendant, or someone he met when cycling on Constitution Trail.
23. Years after I finished my BA at UCLA, he said he'd wanted to send me to Harvard (had he the money).
24. He was obsessed with the weather, first following it on the radio, later on TV when The Weather Channel started, and later still on the internet. In his retirement, he spent a couple hours a day reading about the weather on the internet.
25. He told me he loved me at the end of every phone call.
Posted by Carrie Etter at 8:27 pm 2 comments:

Catching Up with Anthologies: The Best British Poetry 2011

NB: In all the "catching up" entries, I have work in the publication.
Salt Publishing and Roddy Lumsden have come up with a British parallel to the well established Best American Poetry Series overseen by David Lehman. The first editor is Lumsden himself, to be followed by Sasha Dugdale next year. While the initial volume is a largely mainstream selection (with, strangely, not a prose poem in sight), it possesses greater energy and range than the annual Forward Book of Poetry, as evidenced in poems by Gillian Allnutt, Amy De'Ath, and Chris McCabe, among others.
The advantage of a single poet reading through a year's magazines for selections, over the Forward's approach of taking four selections from each magazine editor, manifests in the larger selection of younger and emerging poets therein. It's good, too, to see in the represented magazines a mix of the usual suspects (Poetry Review and Poetry London, but not, interestingly, TLS or LRB) and such internet journals as Ink, Sweat and Tears and Shadowtrain and more experimental journals like QUID and Shearsman. Part of the success of the American series has come from annual editors' choices seemingly pushing beyond personal taste, in an attempt to recognise the best work whatever the style; that range in choice of editors and work selected will need to increase as the series goes on for it to distinguish itself from the Forward. Here's hoping!
Posted by Carrie Etter at 7:05 pm No comments:

Another (praiseful) review of The Tethers

The current PN Review includes Alison Brackenbury's review of The Tethers (over two years after the book's publication, but hey, I'm not complaining). Here are some highlights: "The Tethers reveals Carrie Etter as a poetic chameleon, with a colour to dazzle every reader. [...] This is beautifully done. The Tethers is rich in technical variety. [...] Etter’s endings are persistently superb, including wicked collage, ‘you are saved, I tell you, you are saved’, and passionate entreaty, ‘Tell me which. Tell me both.’" See the magazine to read the whole.
Posted by Carrie Etter at 6:15 pm No comments: 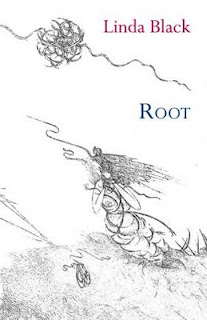 She liked the space on the landing

Where the stairs turned, as if it were extra, a place in which she might pause, leaning her back against the wall, where the sun might shine, as on the lawn at her grandparents’ house, briefly. The lawn she had wished for her children to run on in abandon. When she sees a photo of the children she thinks, how familiar, how familiar these children in their clothes and their faces, as though she could open a door and see them standing there with their voices and their little feet.

Root is available directly from Shearsman Books or from The Book Depository.

Posted by Carrie Etter at 9:04 am No comments:

Catching Up with Magazines: Sunfish

When in Manchester earlier this year for the splendid The Other Room reading series, I encountered a journal I hadn't heard of before, Sunfish: A Magazine of Exploratory Poetics. It's A4, all white with black papers, a clean, flat-spined production. Edited by Nigel Ward, Sunfish comes out three times a year for the low subscription price of £12, and get this--Ward will send you a PDF copy of the magazine free on request if you write to him at sunfishmag at googlemail dot com. How sweet is that?
What with sharp work from Ken Edwards and others in the issue I bought that night up north, I submitted work for consideration straight away. Happily, the new issue, 5: summer/autumn 2011, includes six poems of mine, alongside work by sean burn, Phil Davenport, Amanda Earl, Alec Finlay, and Charles Stein. I haven't had much time to peruse, but already I've enjoyed some of the musical, fragmented lyricism of burn and the playful intelligence of Stein. I hope others will, too.
Posted by Carrie Etter at 10:03 pm No comments:

I'm judging this year's Poetry Society Stanza competition, on the theme of "Breaking the Rules," and hope there are hundreds upon hundreds of entries to read. Seriously. The greater the number of poems submitted, the more gold I hope to find.

You must be both a member of the Poetry Society and a member of an area Stanza to submit (free!); to find your local Stanza, please see this page. You can read more about the competition here.
Posted by Carrie Etter at 3:34 pm No comments: