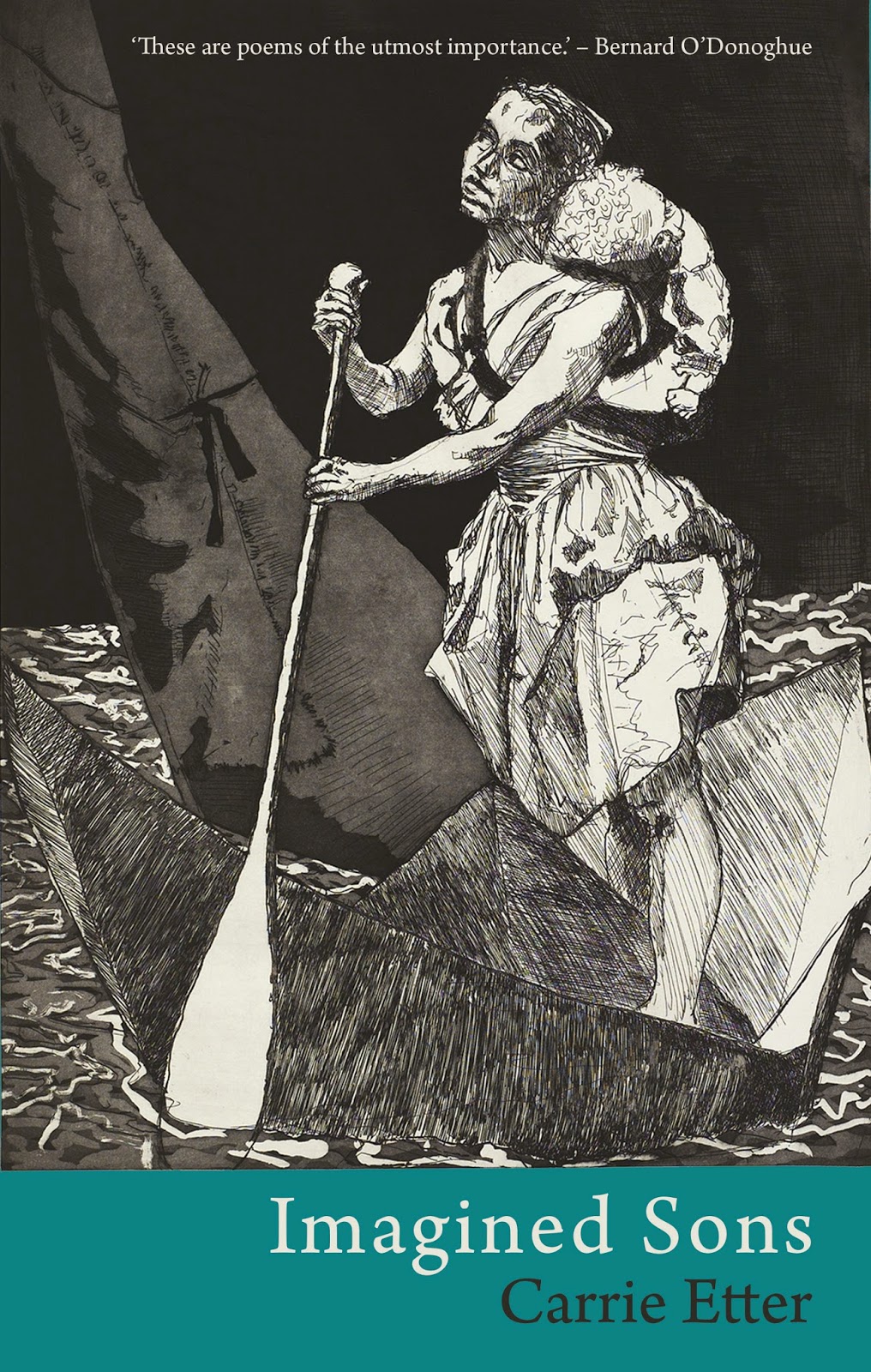 If you go to Seren Books' website and join their free book club, you can purchase Imagined Sons for 20% off. Follow this link.

"In Imagined Sons Carrie Etter reflects on the experience of a birthmother who gave up her son when she was seventeen. In a series of haunting, psalm-like prose poems of enormous courage and insight, she describes possible encounters with this son now in his late teens, expressing how ‘sometimes the melancholy arrives before the remembering’. The series of ‘Birthmother’s Catechisms’ return to repeated, harrowing questions that yield different answers at different moments. This quite extraordinary book by a writer of great imagistic power and skill leaves a mark on the reader which is ineradicable. These are poems of the utmost importance."   --Bernard O'Donoghue

"Carrie Etter’s stellar new volume, Imagined Sons, folds the wrenching passion of displaced motherhood into a fascinating sequence of poems.  Etter writes with intelligence, imagination and style—and not a shred of sentiment.  Each poem packs a profound surprise as the birthmother’s vision of a son reappears in guises equally palpable and surreal.  Neither a memoir nor a narrative, the book opens lyric windows to interior experiences, and it rings with psychological truths.  This gifted poet defines poetry as she wrestles with ambiguity."   --Molly Peacock


Reviews of the Poetry Book Society Pamphlet Choice, The Son (Oystercatcher, 2009), which provides the basis for Imagined Sons:


Peter Riley describes The Son as "quite startling--a serious work about loss through a terrific play of imaginative resource," while the selectors of the pamphlet choice remark, "There is something too, about how time moves, or how it doesn't, in a world akin to that nightmare in which you are running and running and your legs are jelly and you are getting nowhere. The fact that the poems in this collection are either prose poems, which can shuffle on the spot, rather than move along with a sense of narrative, or catechisms which go back and forth with different responses to the same question, adds to an overall feeling of being trapped. Indeed, these poems work by accretion, so the more you read, the more powerful that feeling becomes."

"Carrie Etter's sparkling, serious beating-out of prose poetry and catechism continues in a finely judged sequence, grieving and honouring and surprising on every page. 'It is time' (Etter quotes Celan) 'the stone made an effort to flower'. And so this fine book, its respect, sadness and subject." --David Morley in Poetry Review

"The "Imagined Sons" poems are short dream-like stories, which hit exactly the right note, as suppressed emotion resurfaces in our dreams. There's a surrealist element to these stories, with a motif of a young man, familiar, but out-of-reach, the repetition of which builds up a powerful sense of longing.

The first and last poems - both in the catechism form - link the personal loss to the public loss of the 9/11 attacks. It's a risk, but it works, due in part to the understated nature of the poems; in fact, it succeeds in universalising an experience that might otherwise be intensely personal." --Alan Baker on his blog, Litterbug

"What impresses me is how complex ideas have been made so enjoyable to read. The narratives are fluent, intriguing, somewhat surreal, and often humorous. They seem simple, yet strange, and are deeply affecting. They mine the deep pit of memory and expectation, and are haunted by what they don’t know, what isn’t said, what remains lost or unfathomable." --Rob A. MacKenzie, Sphinx 19

"This is a moving collection of texts: some are prosy and some are lyrical. It is not like anything else I have ever read:

Poems in the pamphlet first appeared in Barrow Street, PN Review, The Republic of Letters, and The Times Literary Supplement, among other journals.
Posted by Carrie Etter at 9:00 am